Still one week to go. The trees are in beautiful colours. Autumn is in the country. The perfect setting for some fall-pictures, so hopefully the natural landscape won’t change in to brown messy mass when we finally have the Jupiter red AMG GT next weekend. First world problems, but we were luckily the trees did not lose all their leafs yet the weekend we had the red pig fun machine.

Since the 2016 model year the entry model of the AMG GT has now 476 instead of 462 hp. What’s more striking is the price evolution over the years. Back in 2006 the starting price of the AMG GT was around € 119.000 (price in Belgium including 21% VAT) while today you pay according to the official price list minimum € 130.922. Earlier this year Mercedes-AMG overwhelmed us with this second facelift of the AMG GT line-up. New inner headlight design, additional rims, different bumpers and exhausts for the AMG GT, the GT S and GT C. Not to mention the new digital instrument display, a larger central screen and the redesigned centre console. Back in 2016 the AMG GT family was already treated with a facelift after the arrival of the Roadster and GT R, but the changes were limited to the Panamerica grill, and some additional horsepower for the GT. 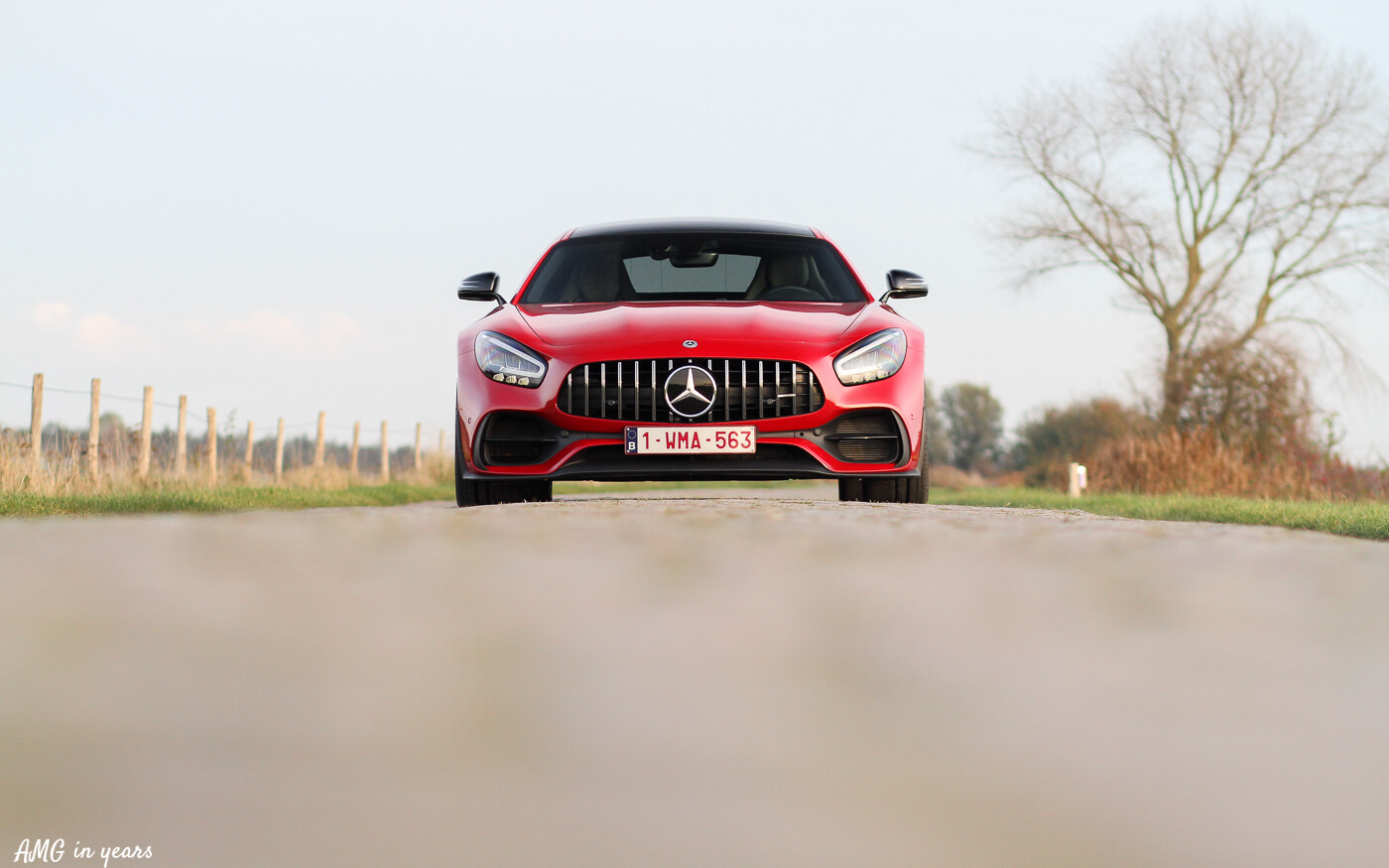 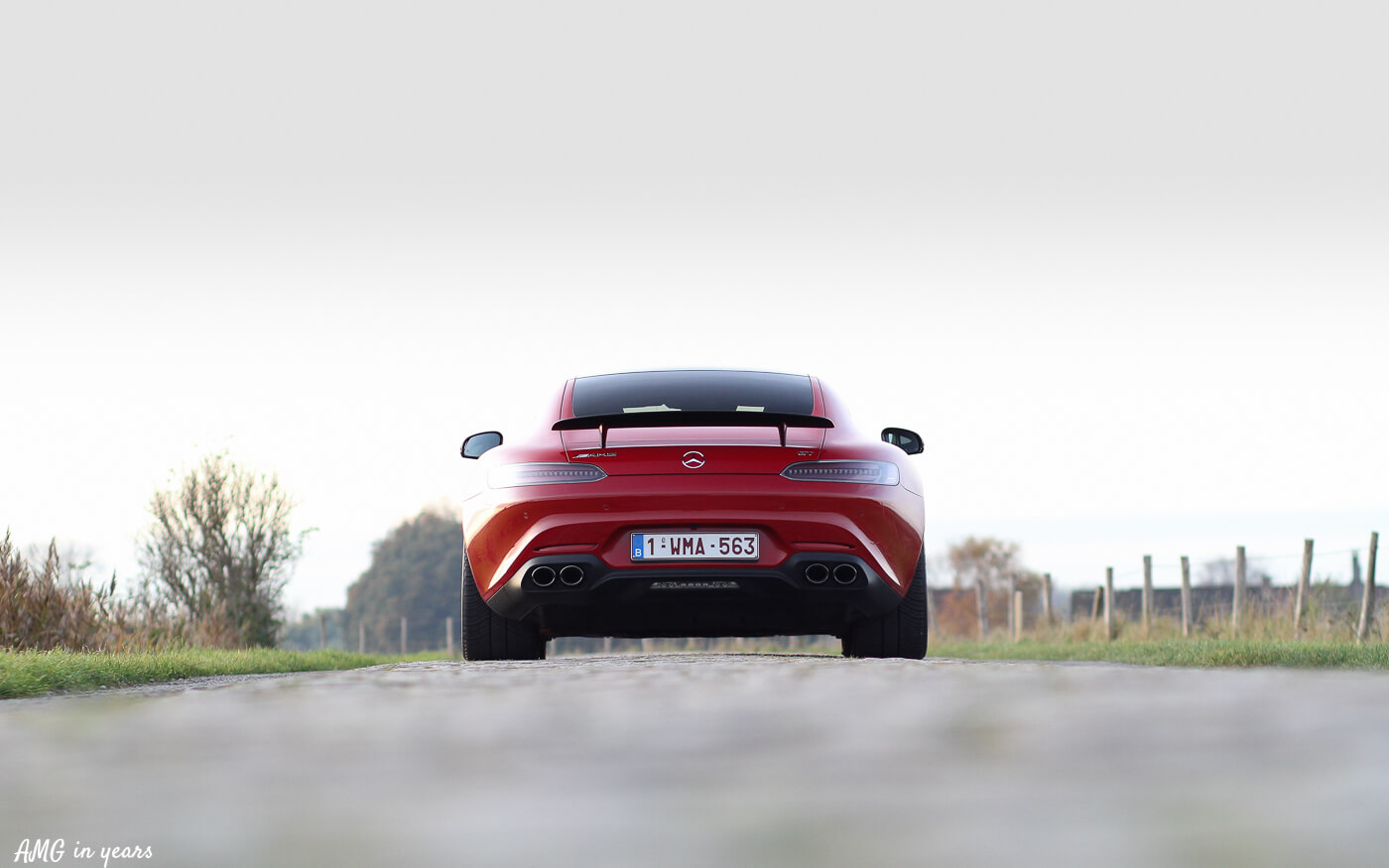 For the AMG GT 2019 model year, the main visual change is the double twin-pipes. Painted in black if you choose for the Night package that also includes tinted windows. In combination with the fixed rear spoiler, the Jupiter Red paintwork, the panoramic roof, black mirrors and the black wheels, the GT we could testdrive is a real eyecatcher. People almost started to applaud spontaneously when the GT passed through the streets. There are basically two requirements that should be met if you want to be in love with a car. Firstly, you look back automatically at the car when you parked it while walking away and secondly, while driving in the city center you check the reflections of the car in the windows of the shops. If this isn’t the case I’m afraid you need to find yourself another love. Speaking about love. Red is the color that makes a bull furious, and so our GT is the car that radiates charisma among our grey world. Cheers to those who dare to choose it. 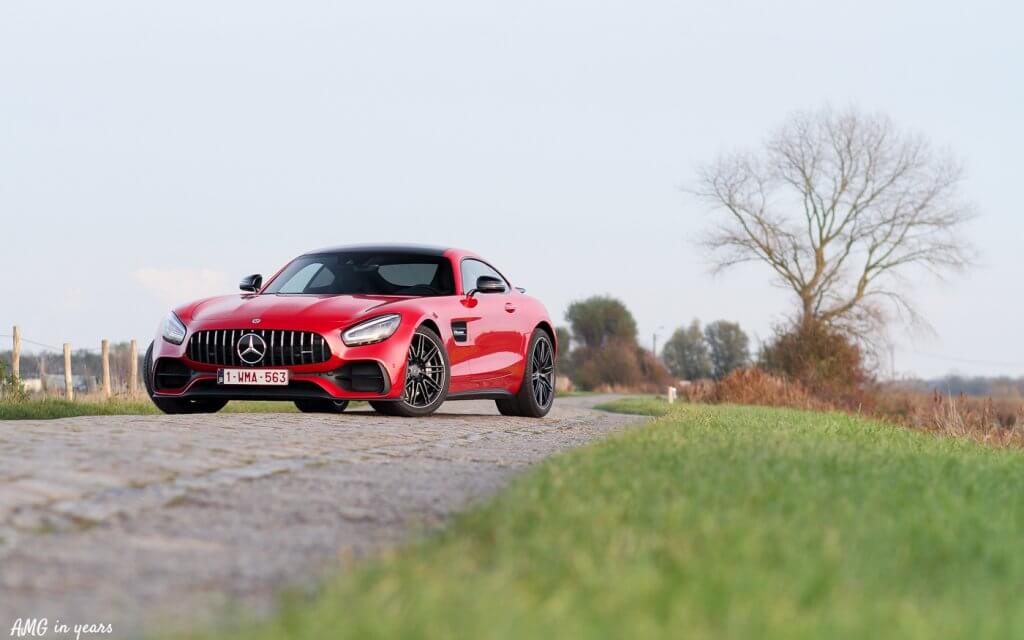 Let’s start by mentioning that you don’t need to be a speed maniac to enjoy this GT. And neither a comfort maniac as the ride is quite hard for a entry AMG GT. If you intend to use this AMG GT as daily we would recommend to not go for the optional AMG Performance seats. However, thanks to those seats you can cut the sharpest bends and still stay glued to your seats. Just to mention that at all kind of speeds the GT is entertaining. According to AMG the GT embodies the core of AMG which is ‘Driving Performance’. With capital letters off course. Overall the GT is slightly rear-biased because of its front mid-engine concept and transmission in transaxle configuration at the rear axle. The perfect recipe for fast cornering, but because of the enormous nose it’s not always easy to know the exact position of the front wheels. 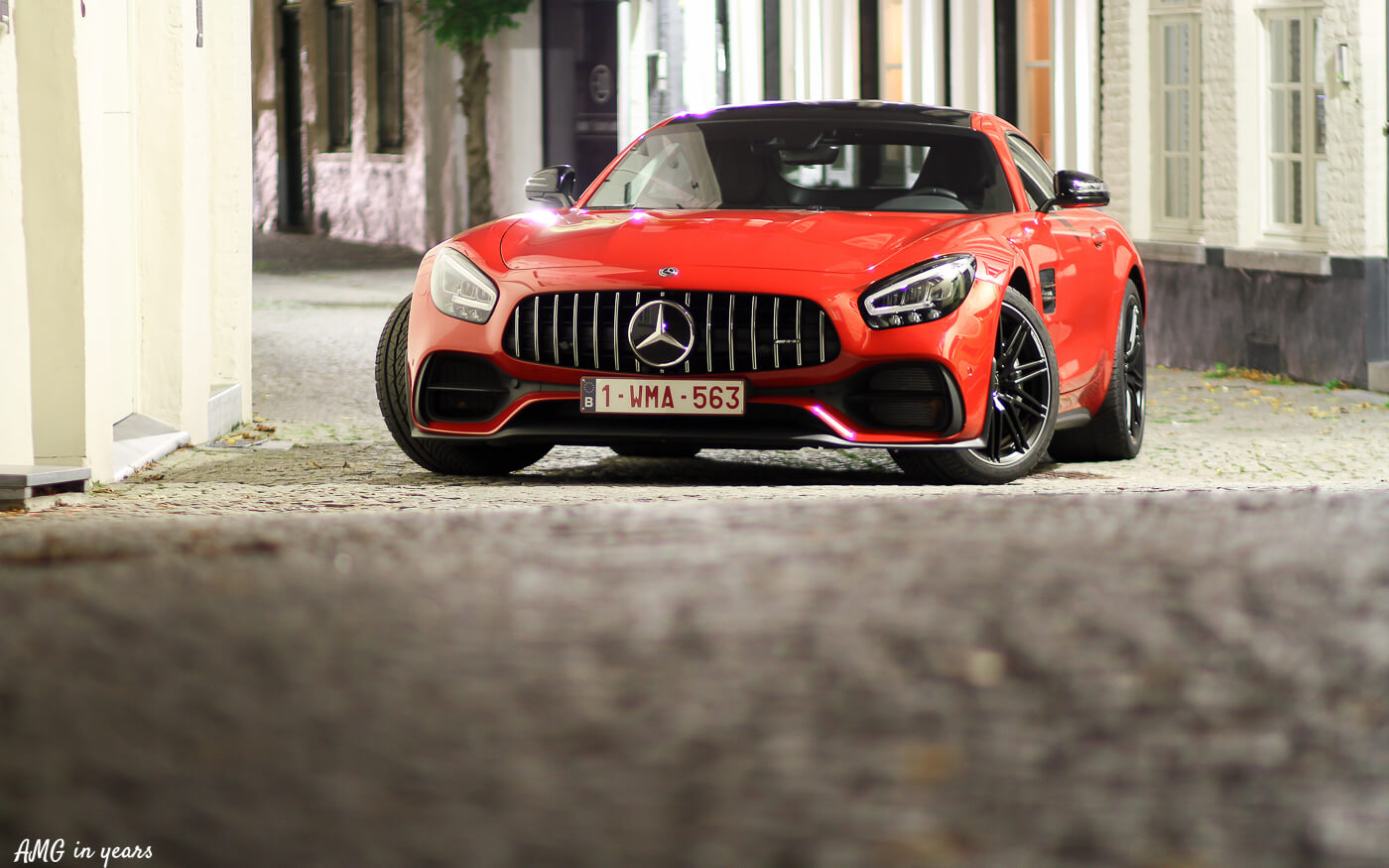 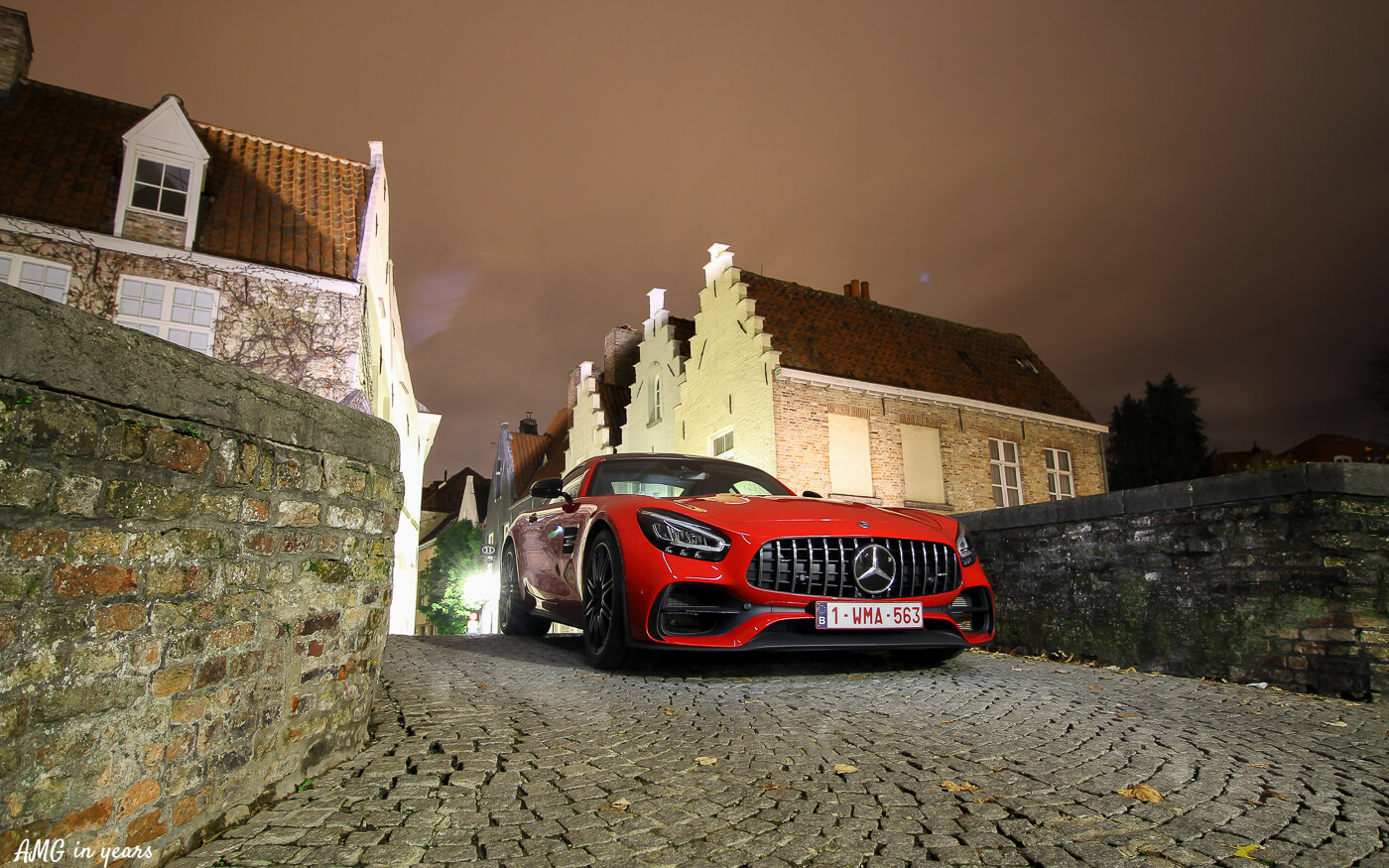 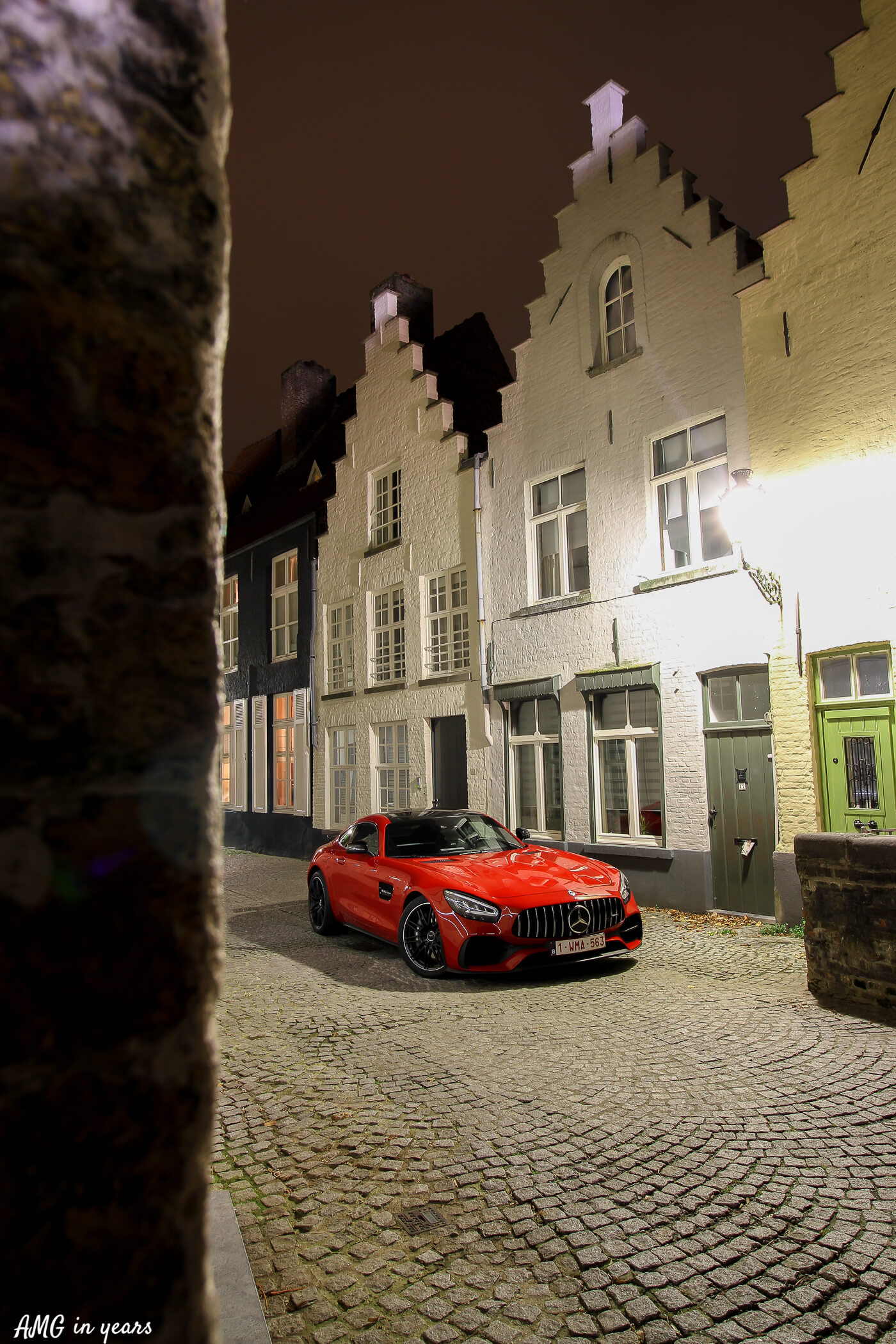 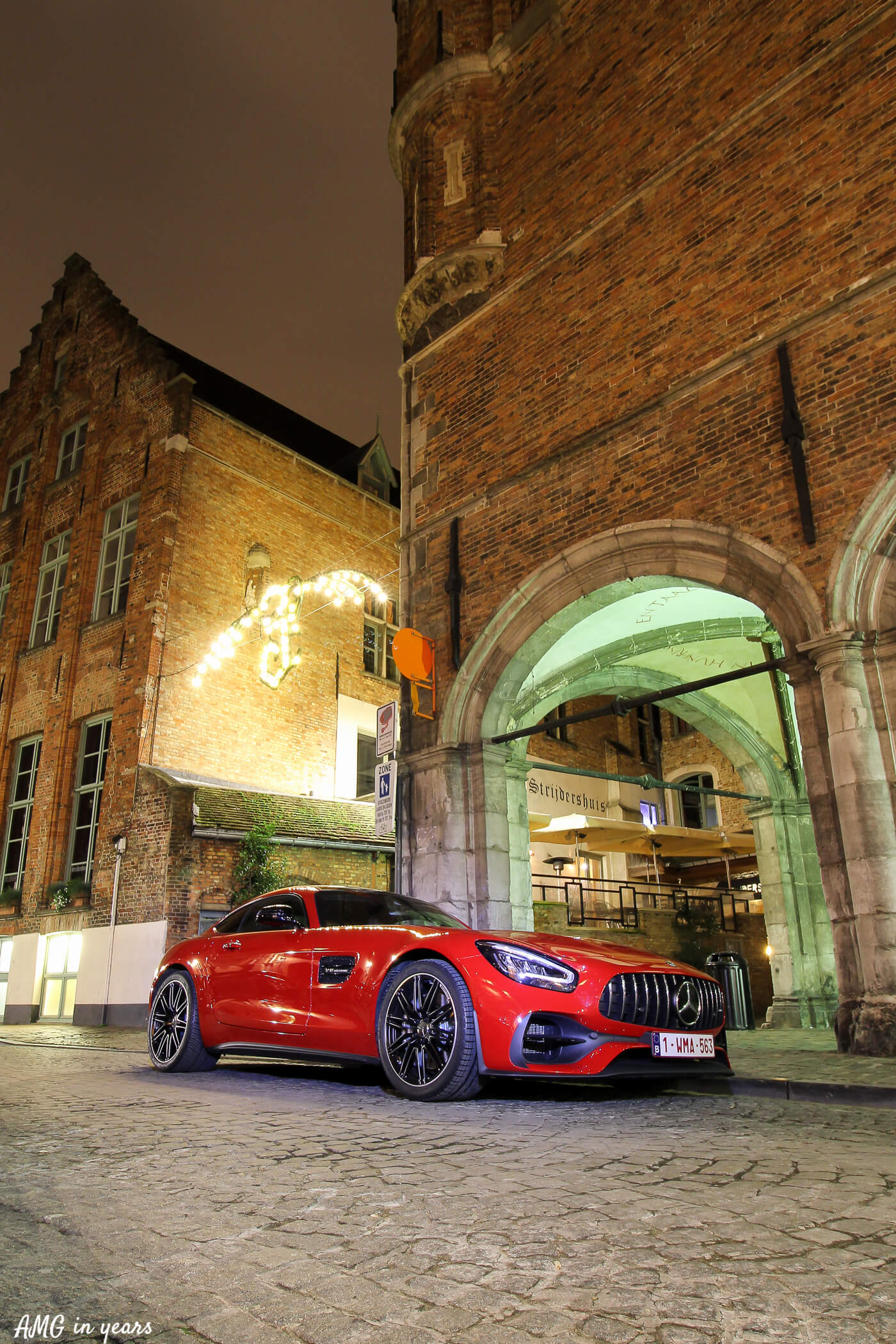 Despite being the entry-AMG GT this machines goes through your entire body. Flooring the gas pedal from a standstill immediately increases your heartbeat. The area is passing by and before you know you are at speed levels that are an attack for your driving license. As usual, the sound experience provides an extra dimension. It remains an AMG off course. The standard AMG Performance Exhaust is part of this story off course. The GT leaves a roar everywhere. 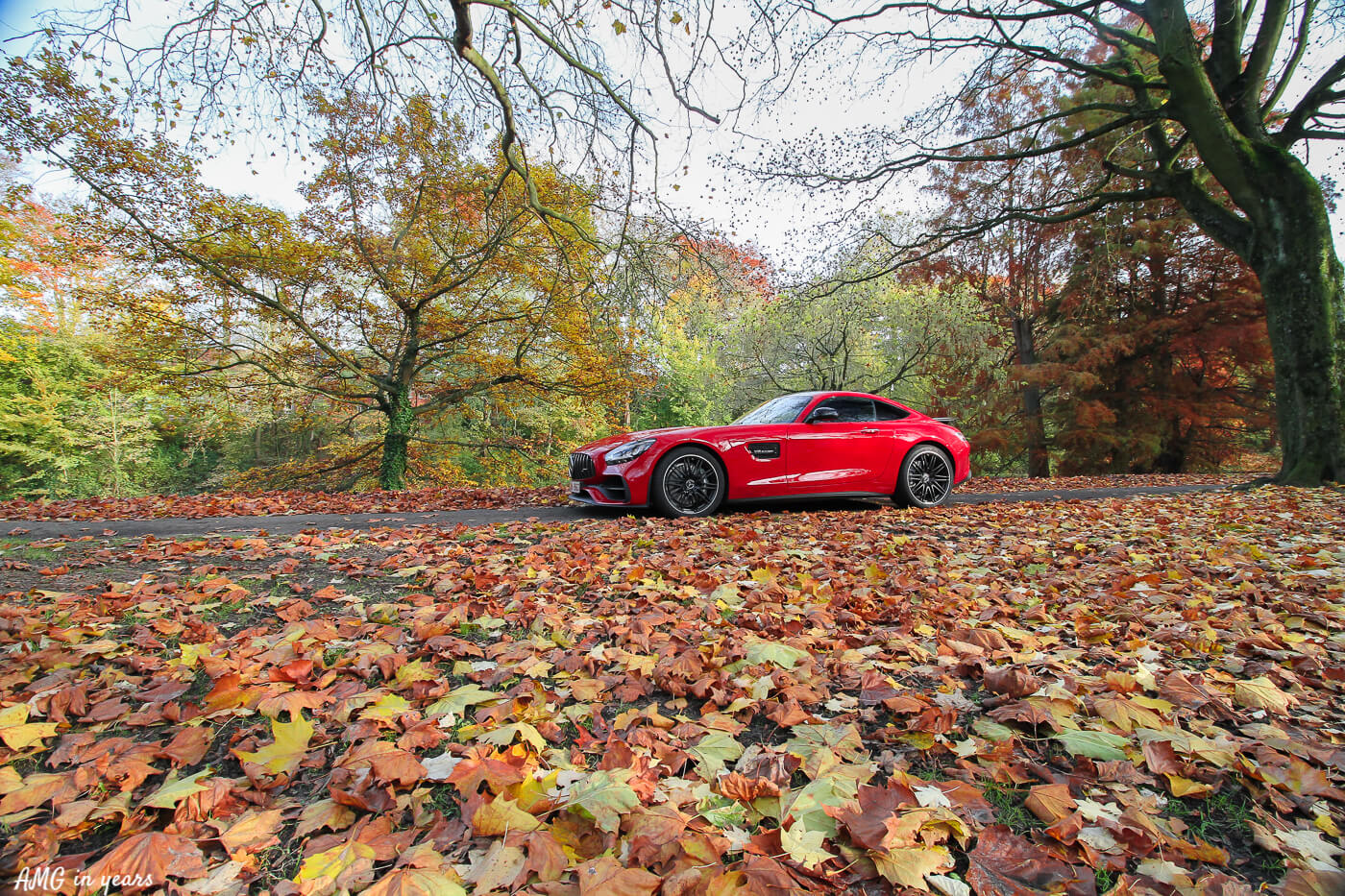 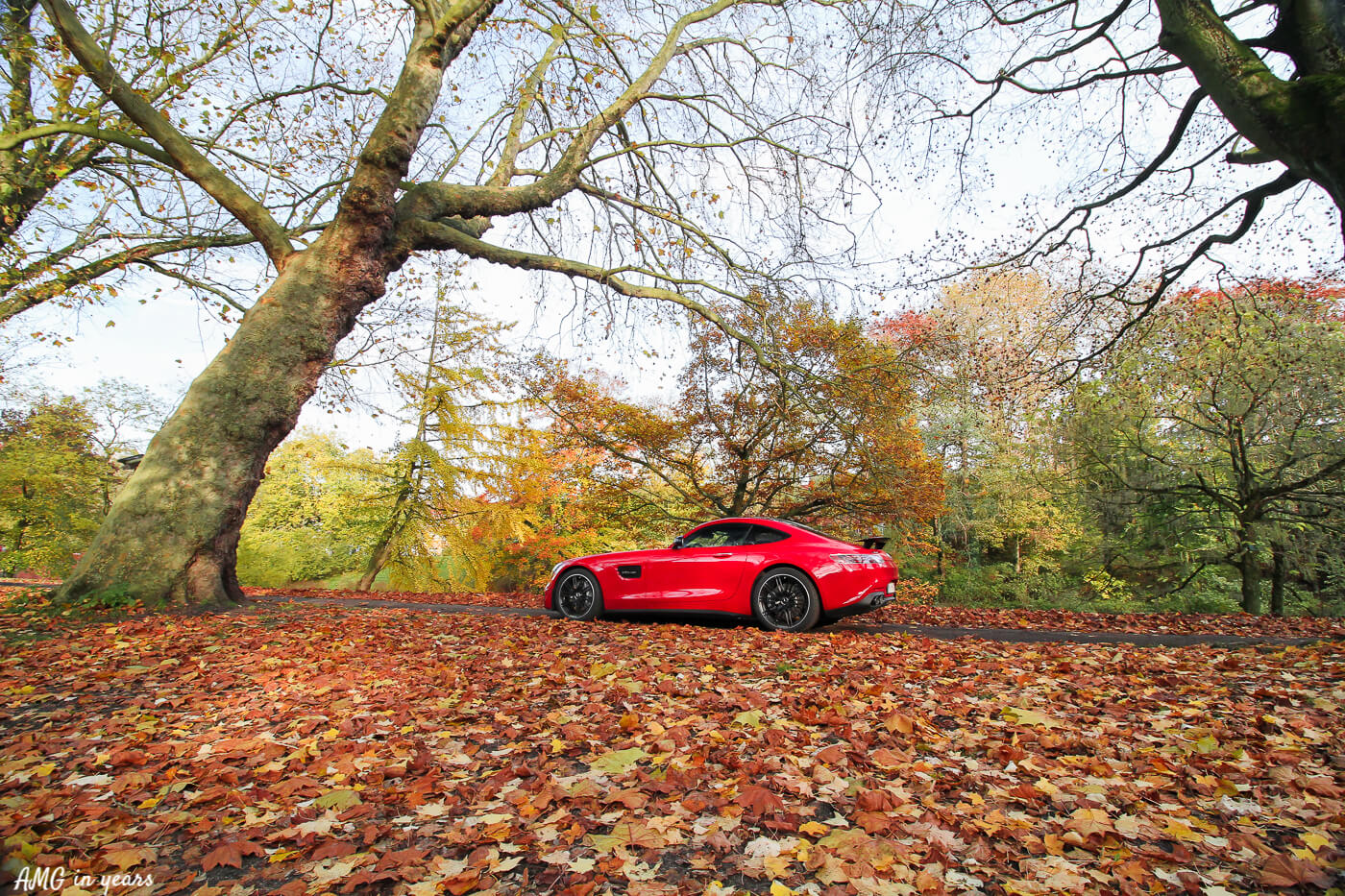 In contrast with the GT R you cannot adjust the level of traction control with a button on the center console. On the GT there’s a 3-stage ESP system which depends on the selected driving mode of AMG Dynamics (Comfort, Sport, Sport+ and Slippery). Race mode is only available starting from the GT S with the related ‘Master’ mode of AMG Dynamics. You pay the price of this fun at the pump, and at the Mercedes dealer of course. Fortunately, the consumption is not exuberant, to the extent that it can still be explained in the current mindset. Remarkable tough is that it is possible to do daily trips less than the average fuel consumption Mercedes is promising (11,4 liter per 100 km). 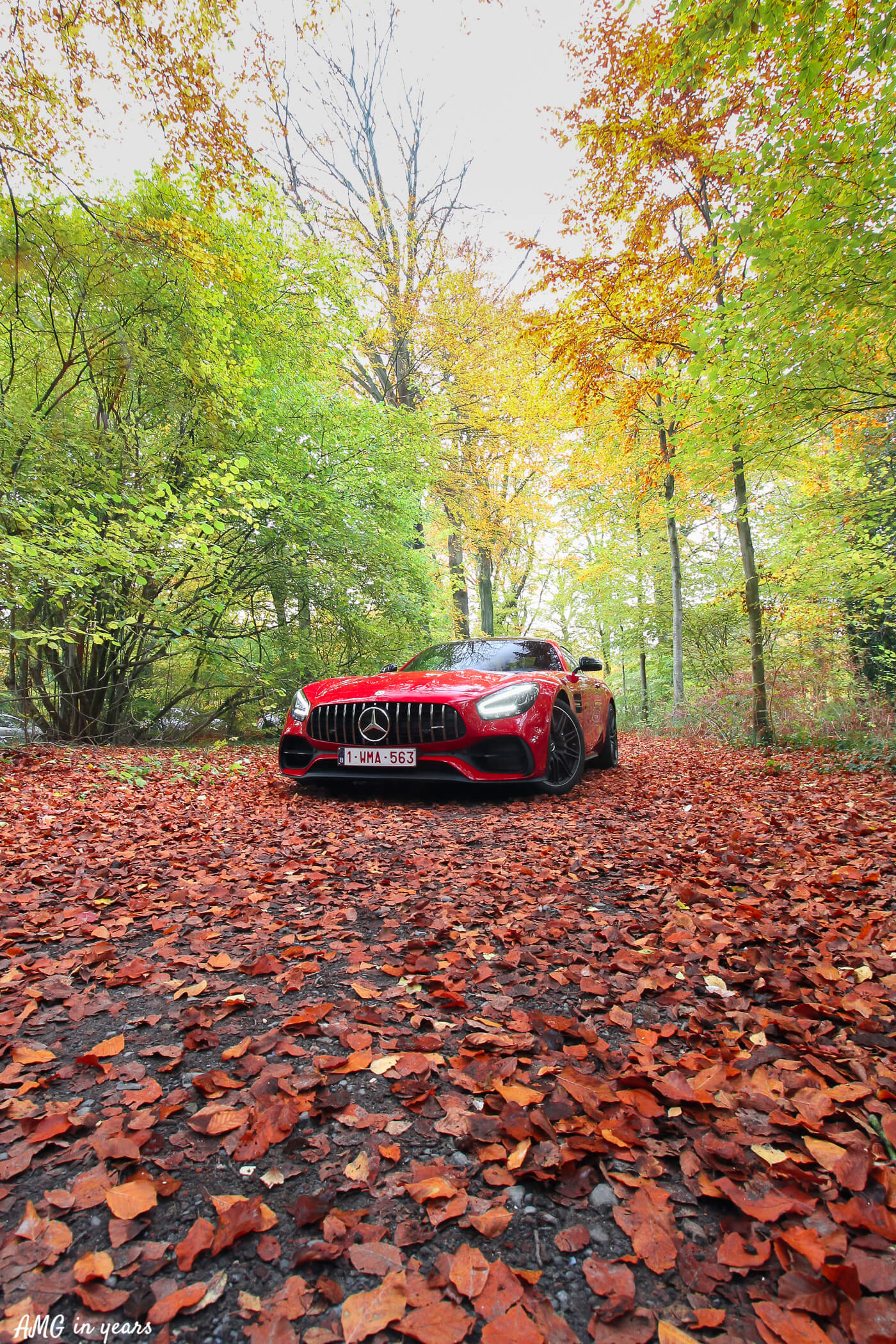 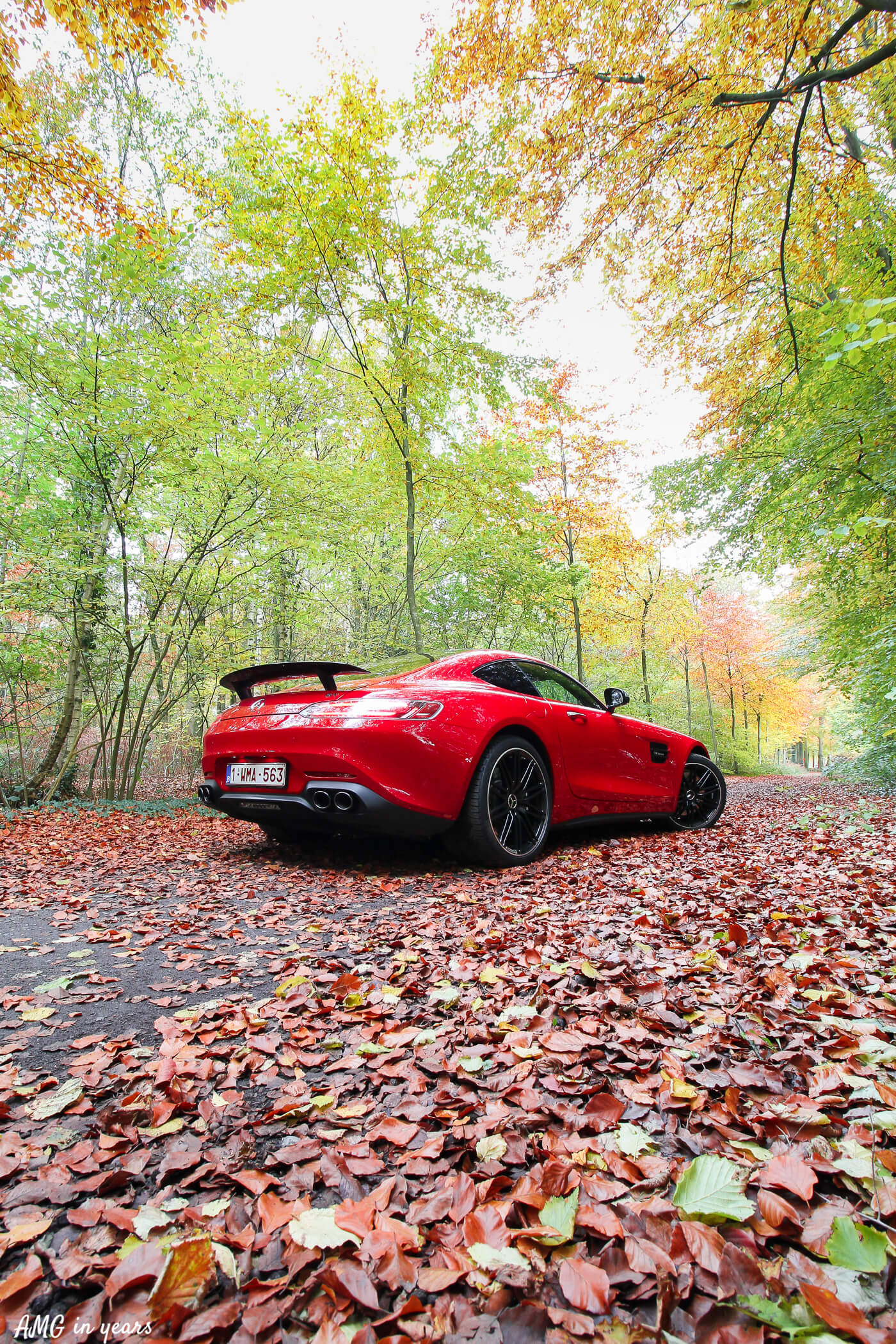 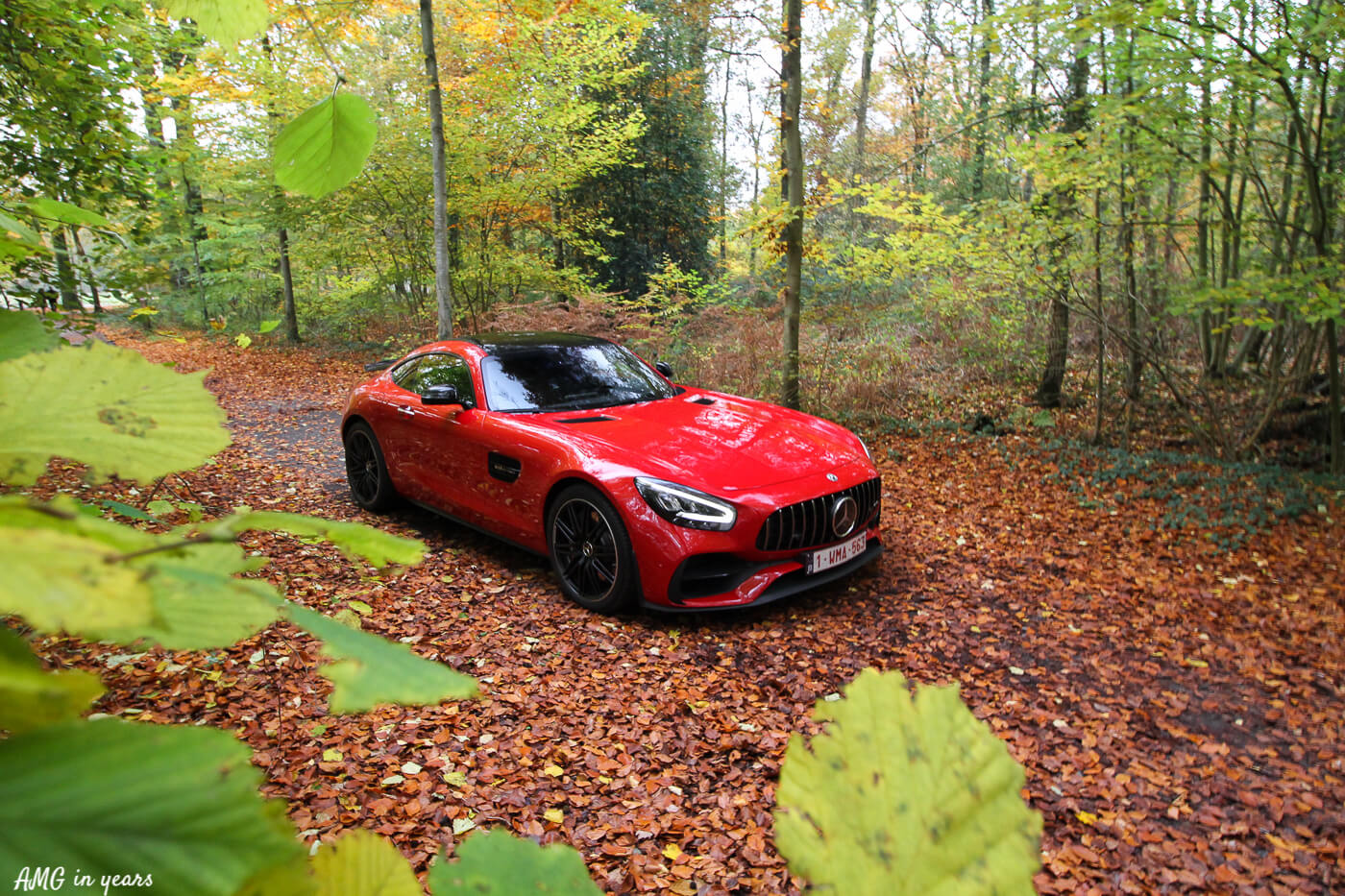 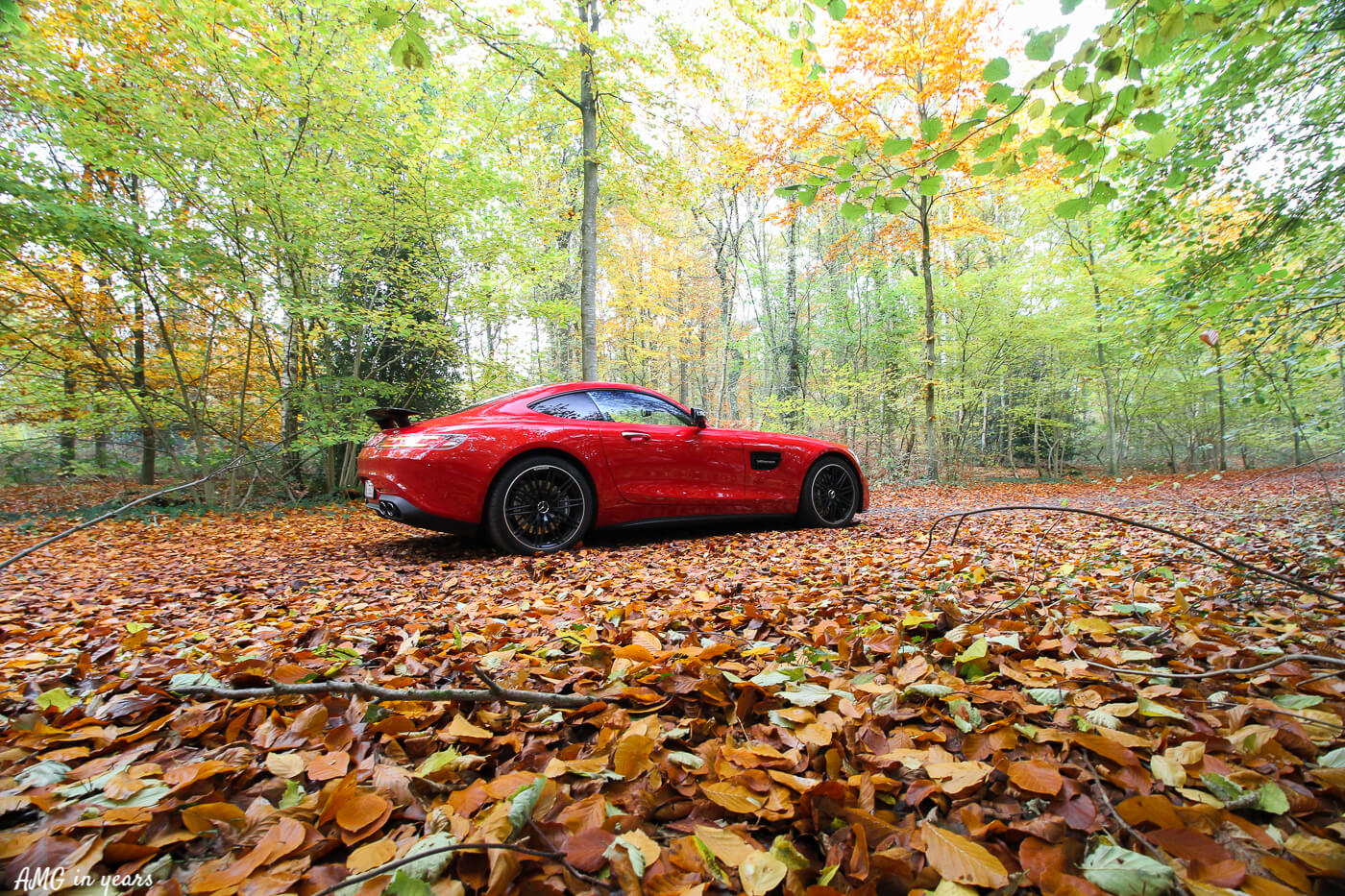 Digitalization is the keyword for the interior of the updated GT. Such as the fully digital instrument cluster with three AMG styles: Classic, Sporty and Supersport. There are also more visualisations in the multimedia display in order to experience vehicle functions better. Tech nerds will also enjoy recording their own circuit in the AMG Track Pace menu. The magic start-stop button has been moved from the center console to a more regular place next to the updated steering wheel with Touch Control buttons. Also the gearbox positioner is a bit larger than before. Moreover the new steering wheel with the optional AMG buttons catches the eye, but well known from the C 63 S AMG we drove earlier this year. The view from the interior remains one of a kind with the endless view on the long bonnet through the cosy rectangular windscreen. 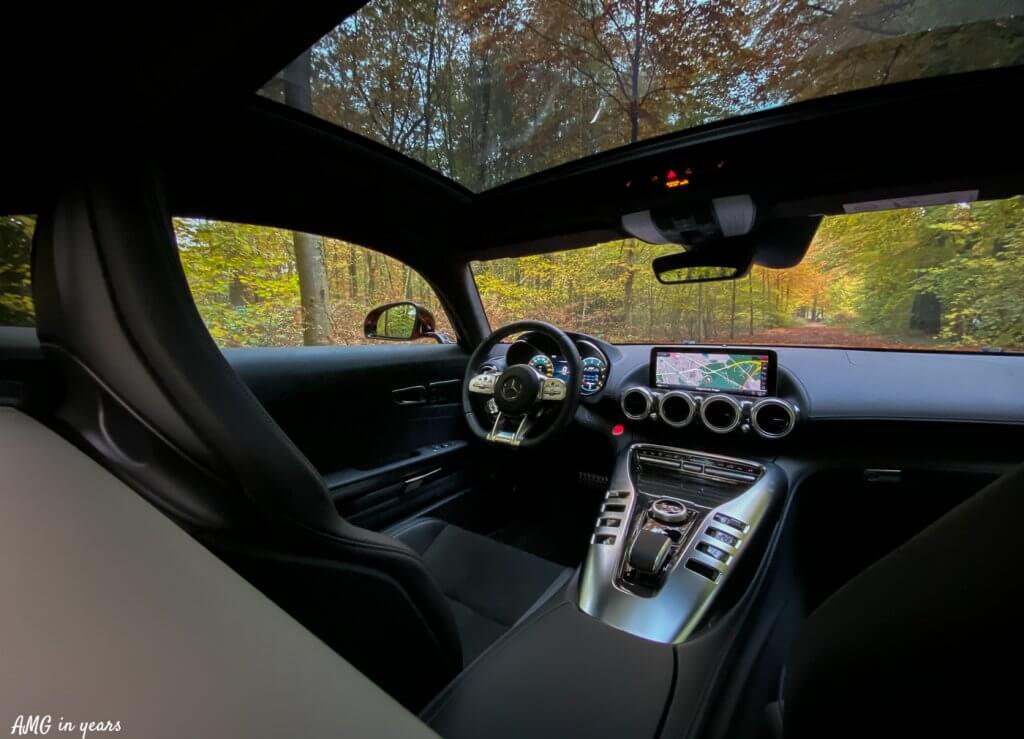 The boot of the GT can only be opened with the key or by making a strange move with your leg as there’s no button at the back to open the boot. It’s incredibly heavy so not sure what AMG did put into that rear spoiler, but could be on purpose to have a better weight balance. At least the opening of the boot is massive, but the trunk space doesn’t break records. As option there’s a separation net that prevents objects to jump into your neck, always a good idea. 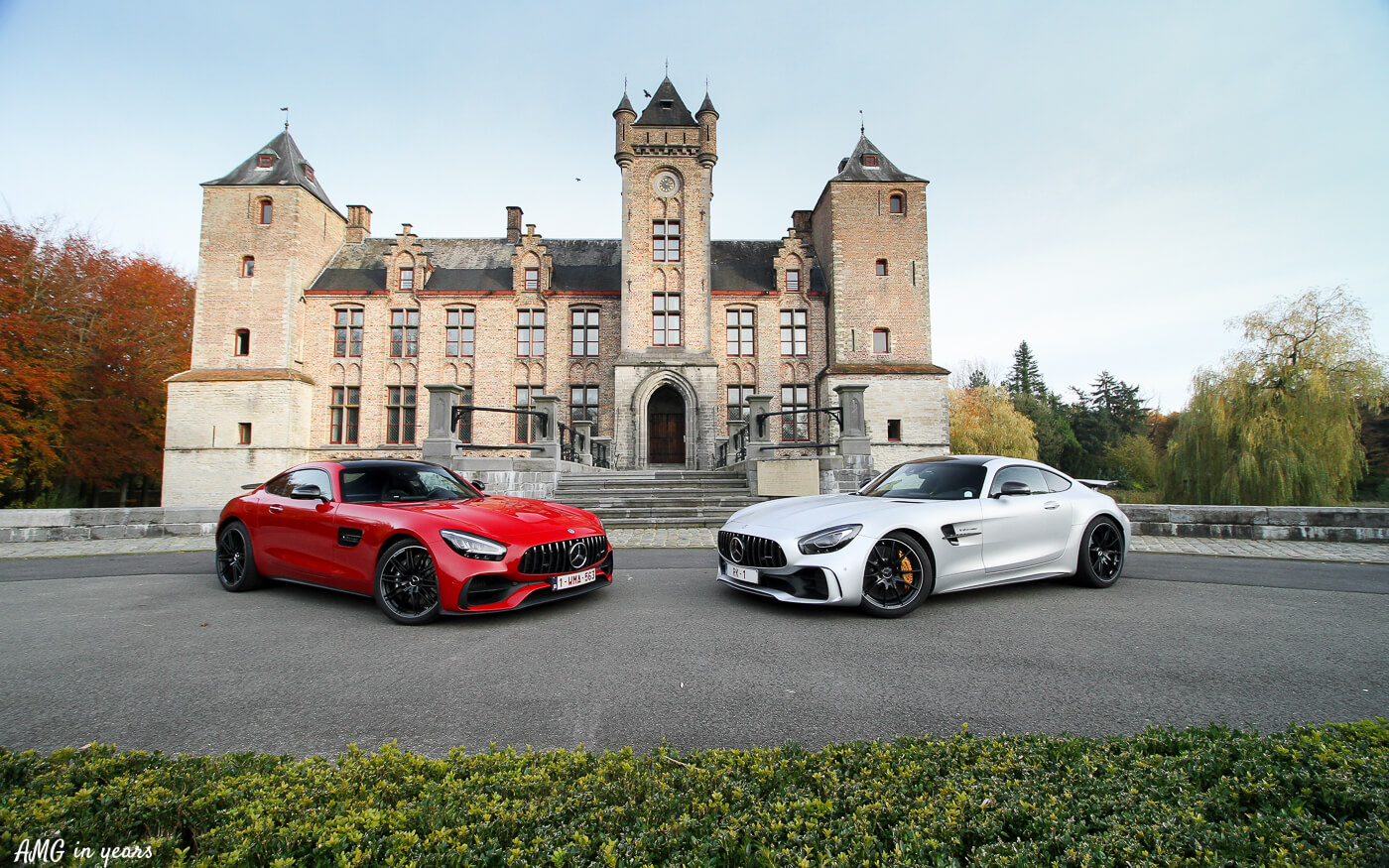 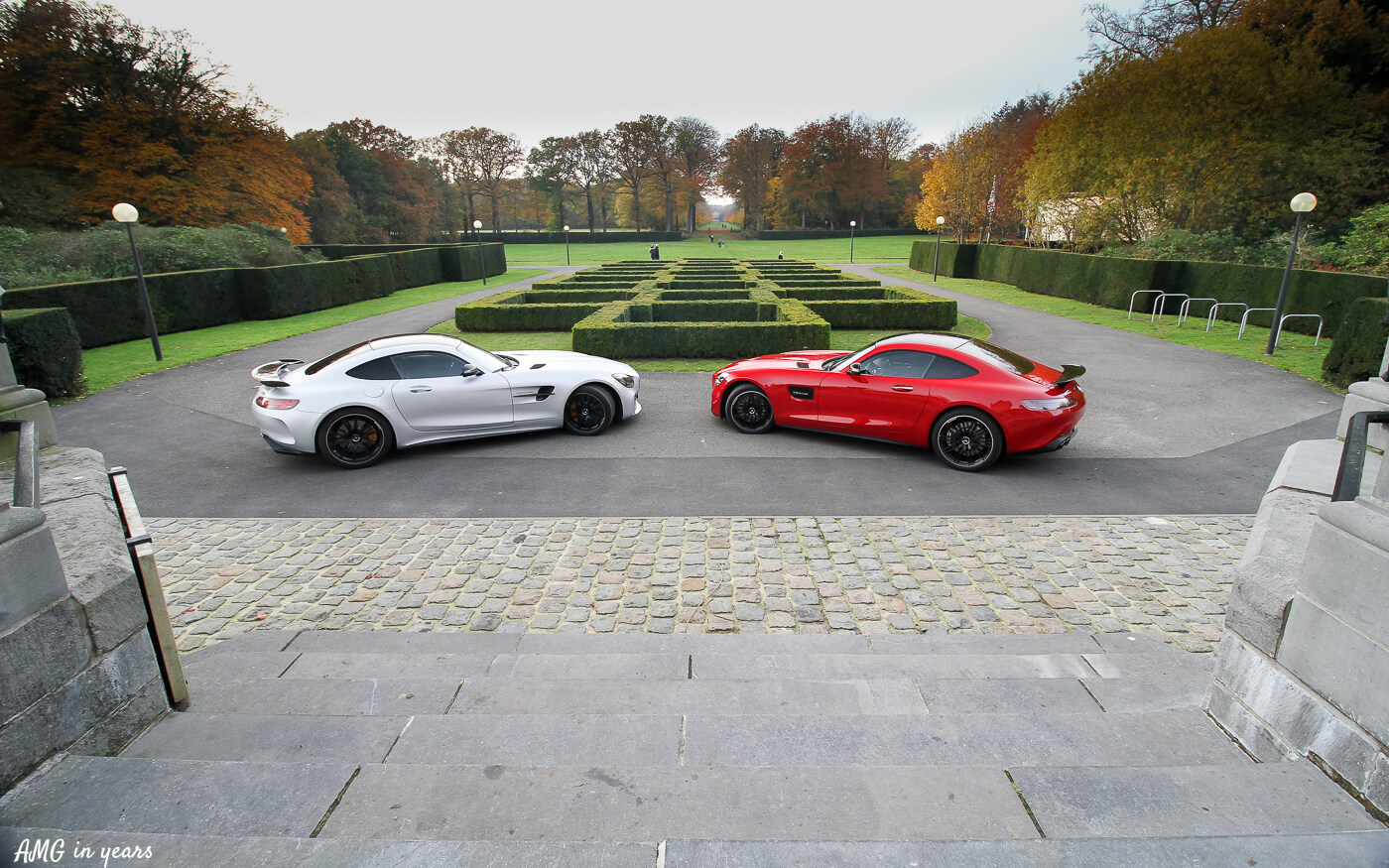 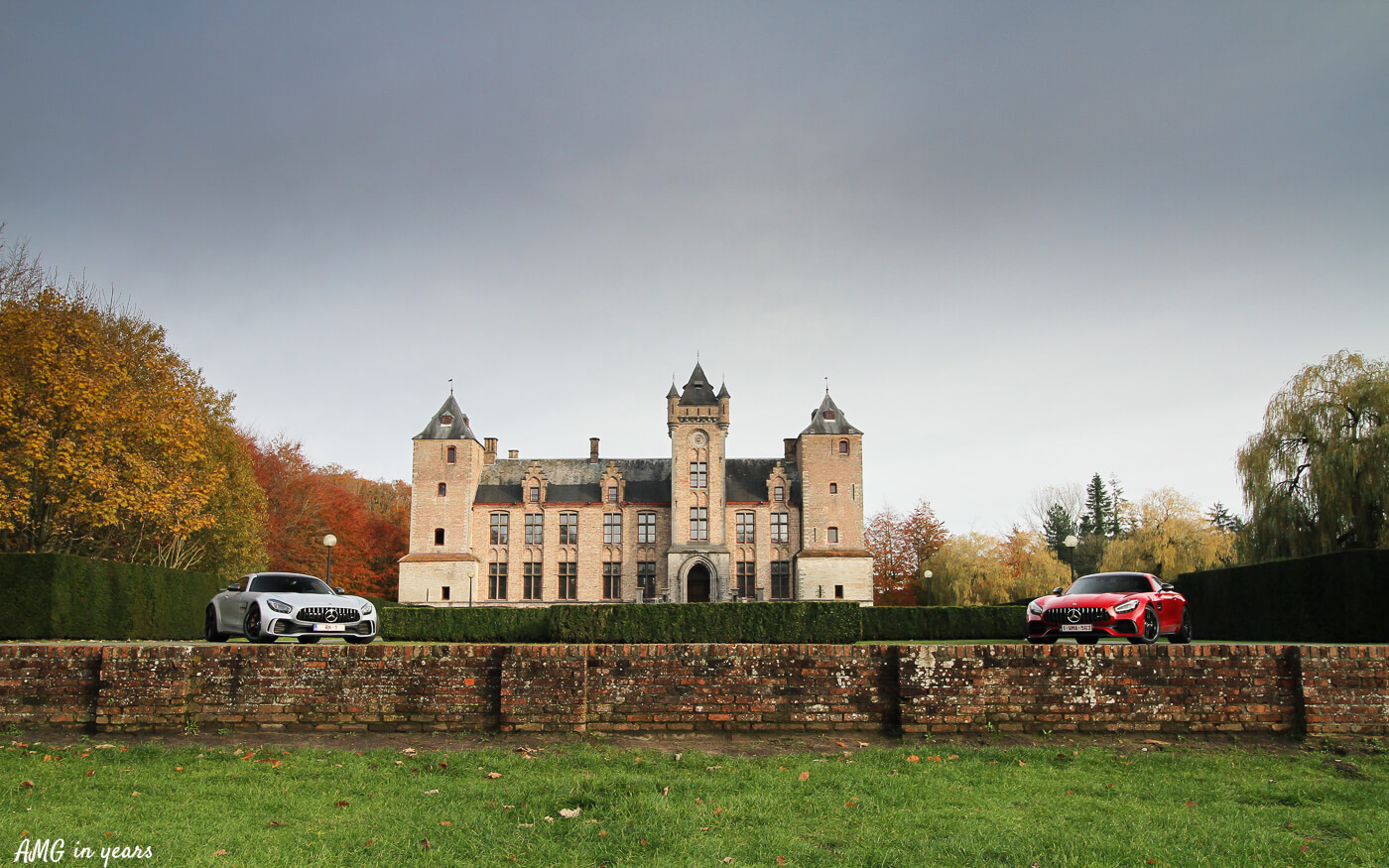 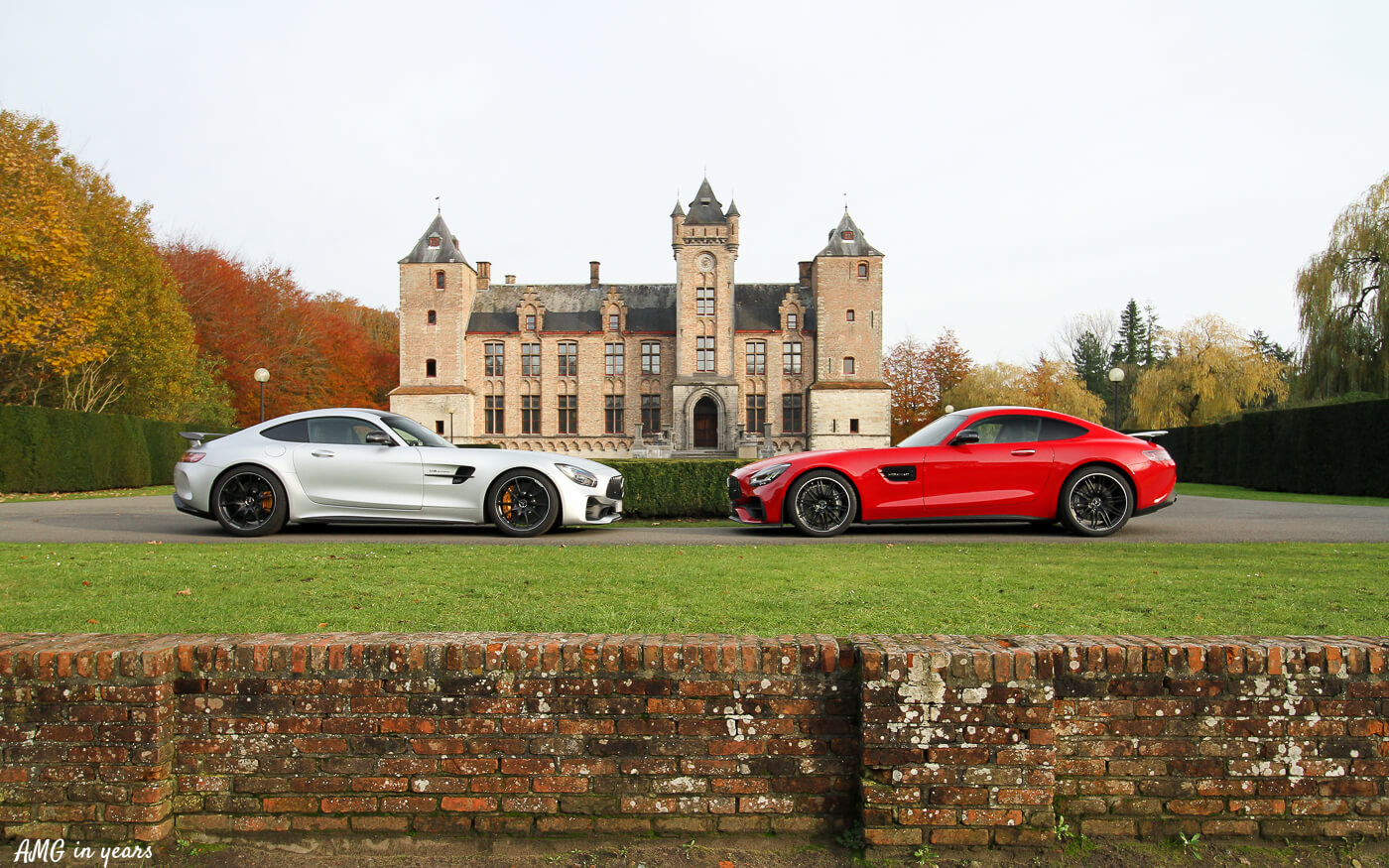 Luckily the standard equipment is already rather broad: parking assistance, Android auto or Apple CarPlay, comfort seats, countless safety features, adaptive LED headlights and several systems under the heading of Mercedes-Benz Intelligent Drive. Fortunately the systems do not cause frustration which can be the case lately. The GT cannot count yet on the MBUX aka Hey Mercedes user interface but the focus in the GT is for sure on Driving Performance. 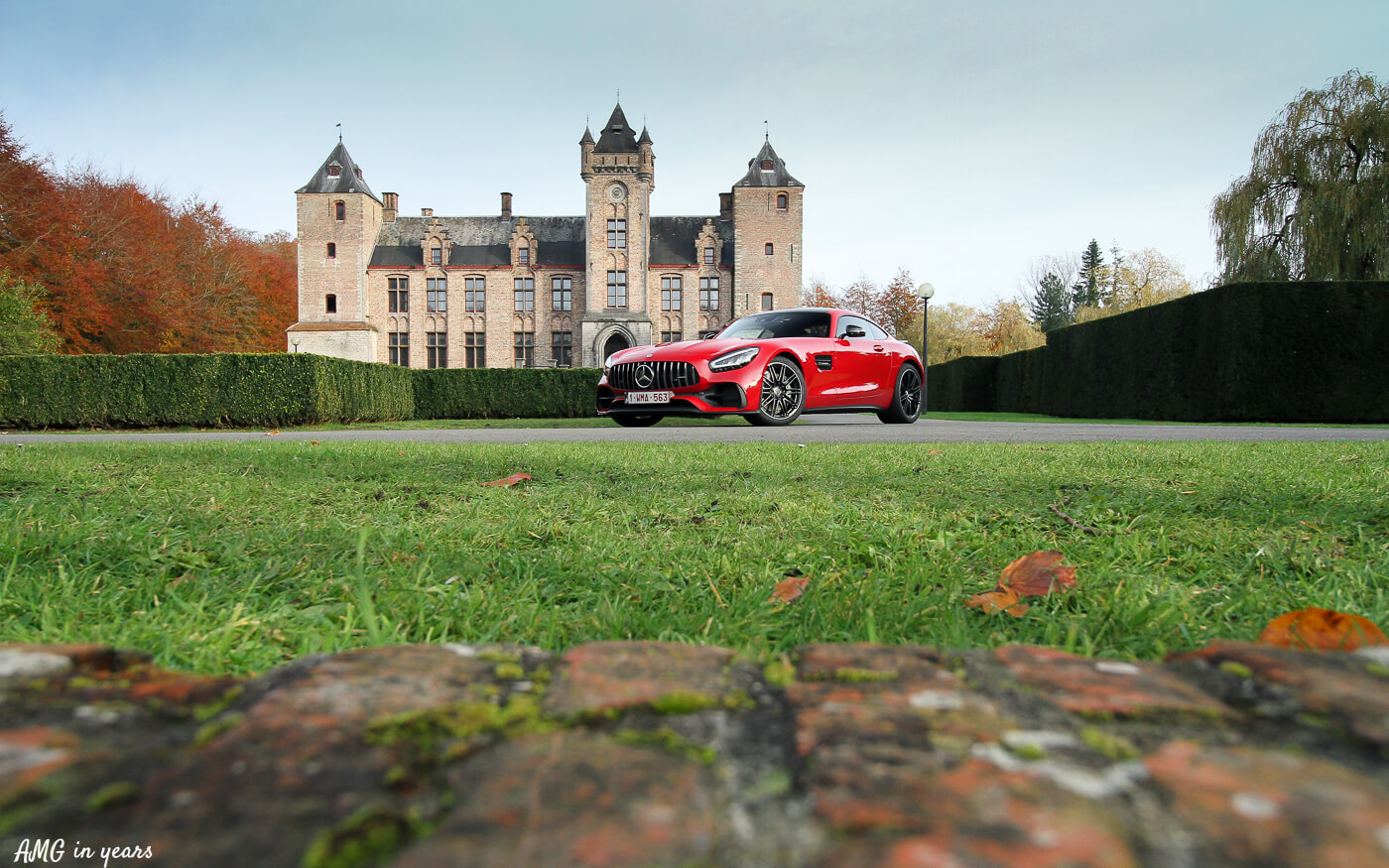 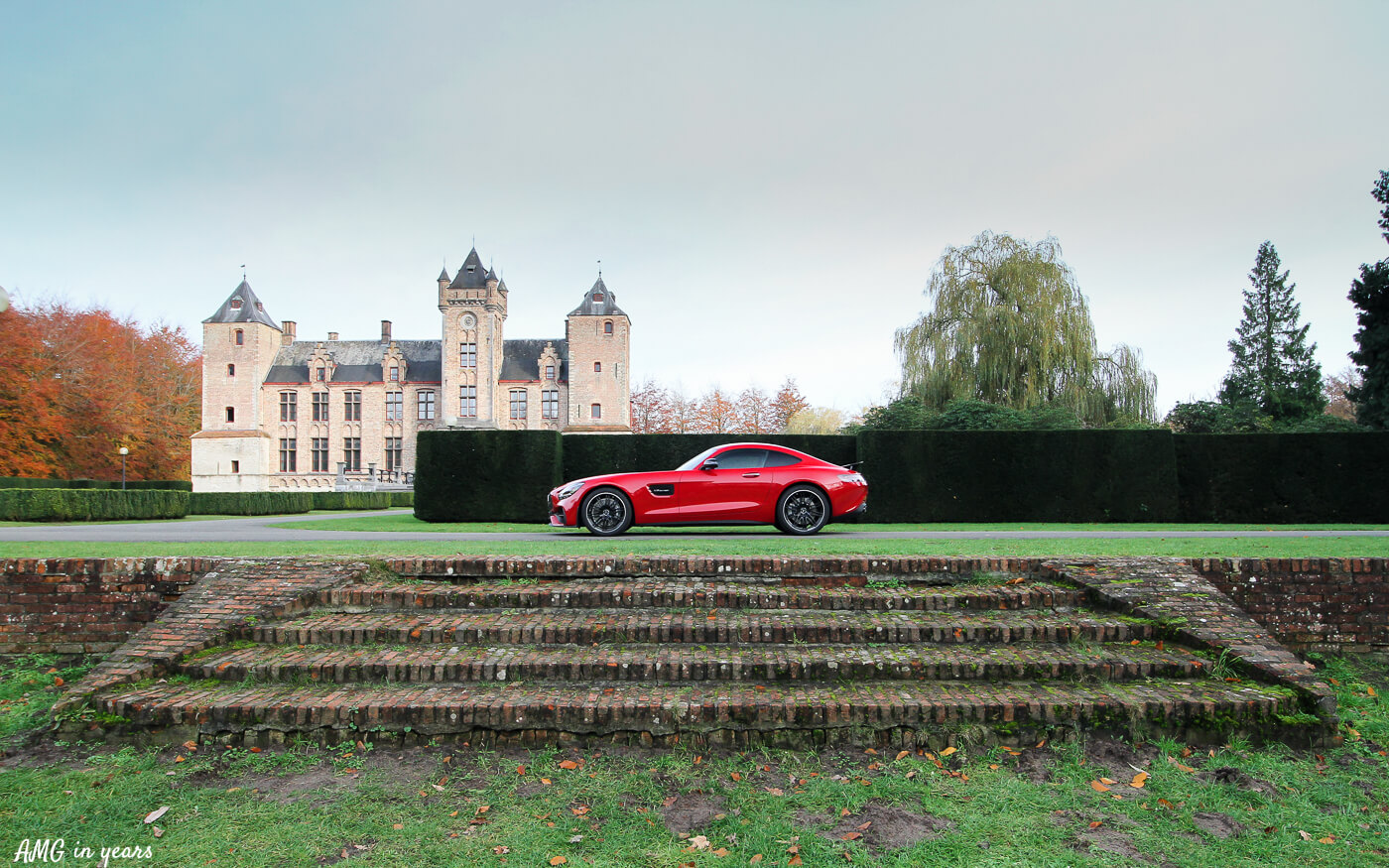 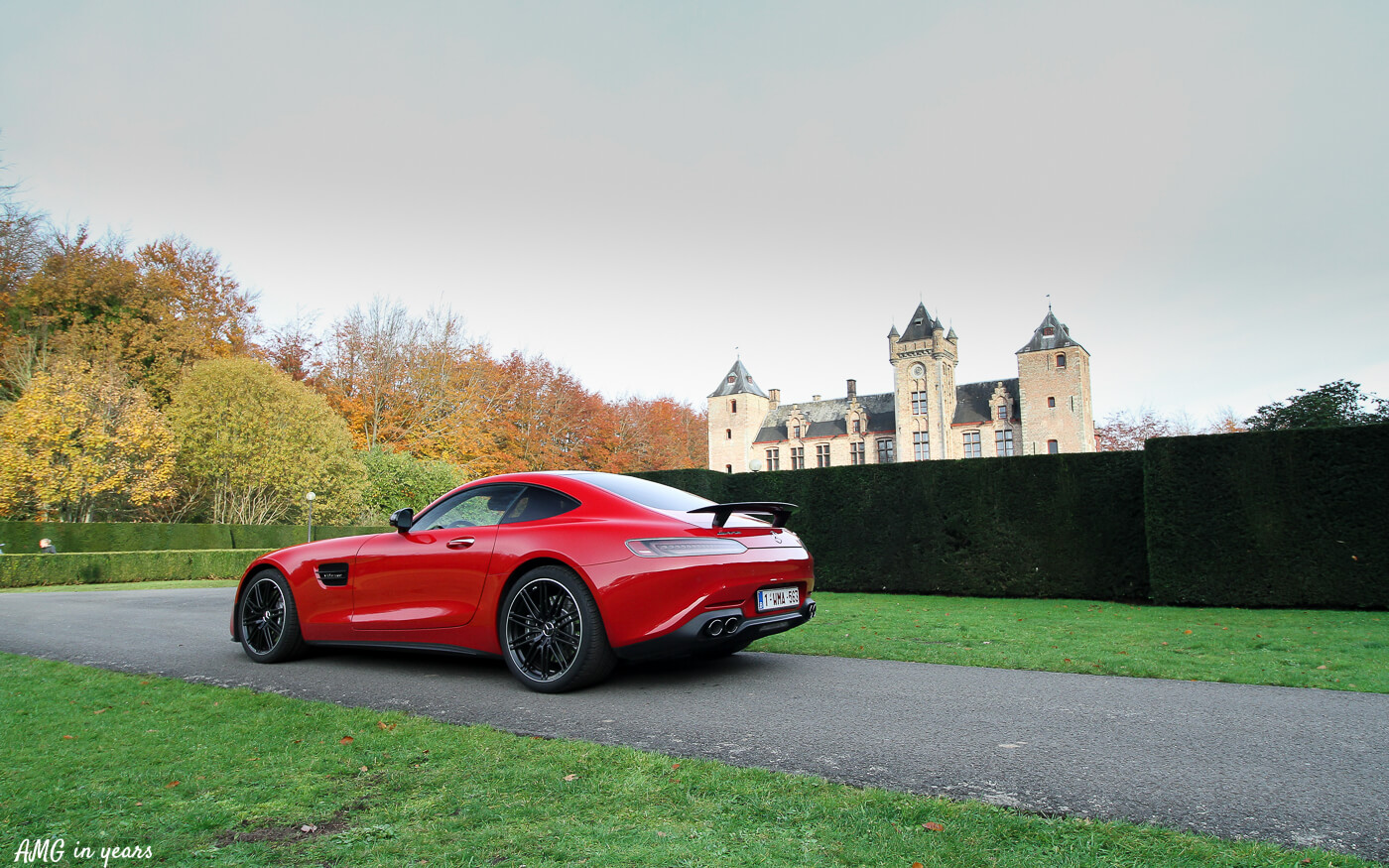 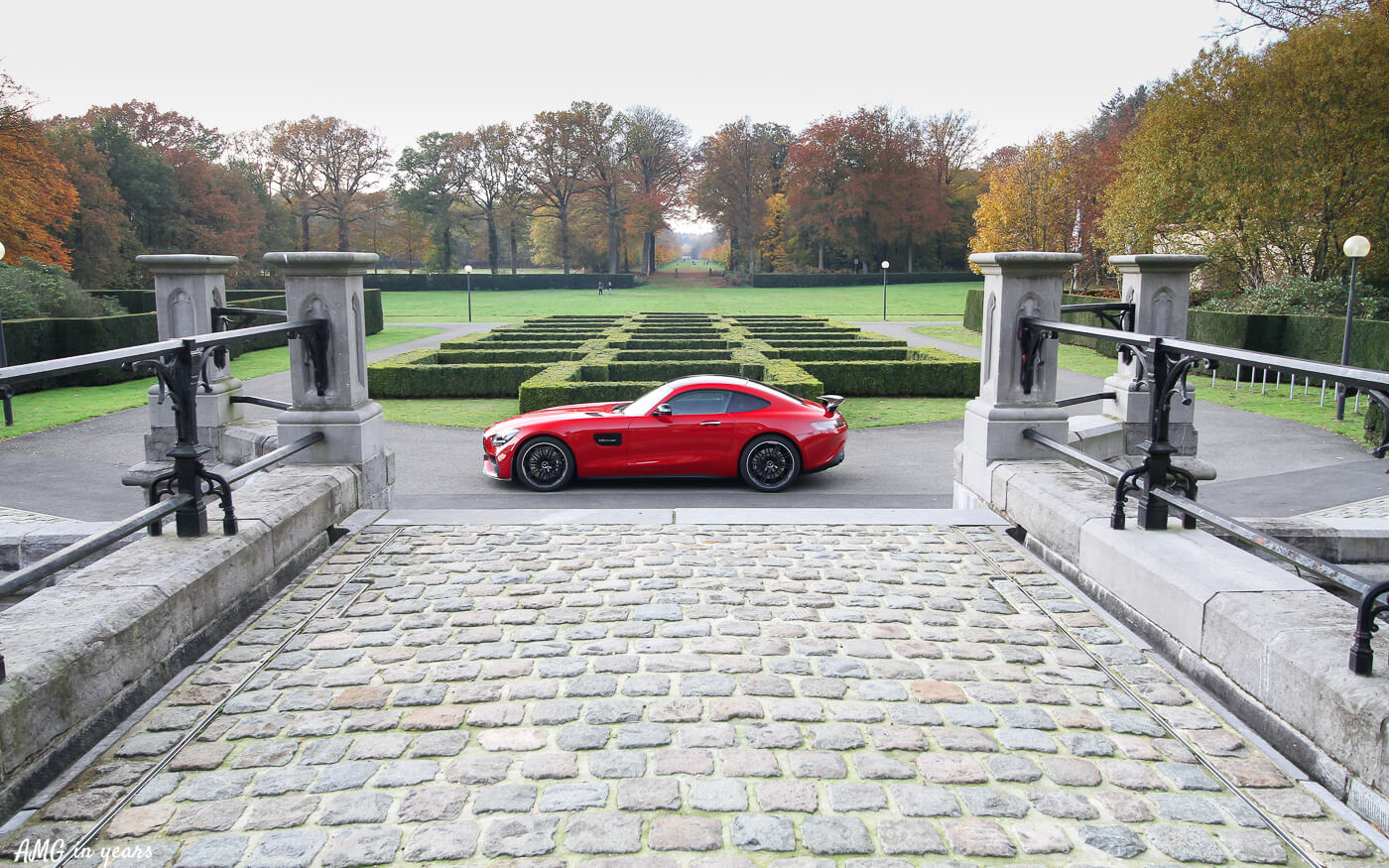 If one would ask to describe the AMG GT in one word then effortless would be a good attempt. The question is not how good this AMG GT is, it’s how long we will be still be able to enjoy this kind of V8 powered masterpieces. If the name of the paintwork is a sign for the place where we will need to shoot this kind of cars, then I’m considering a move to a different planet. Handing over the keys of this AMG GT after some days is a bit like the feeling like finishing last with a karting game between friends. The disappointment stays in your body for a while. Owning this kind of cars is a different story, but it can’t be bad, if you can afford it off course. Not only there’s the purchase price, but also the taxes, the maintenance, tyres and not to forget the fuel. Fortunately dreaming doesn’t cost a penny … 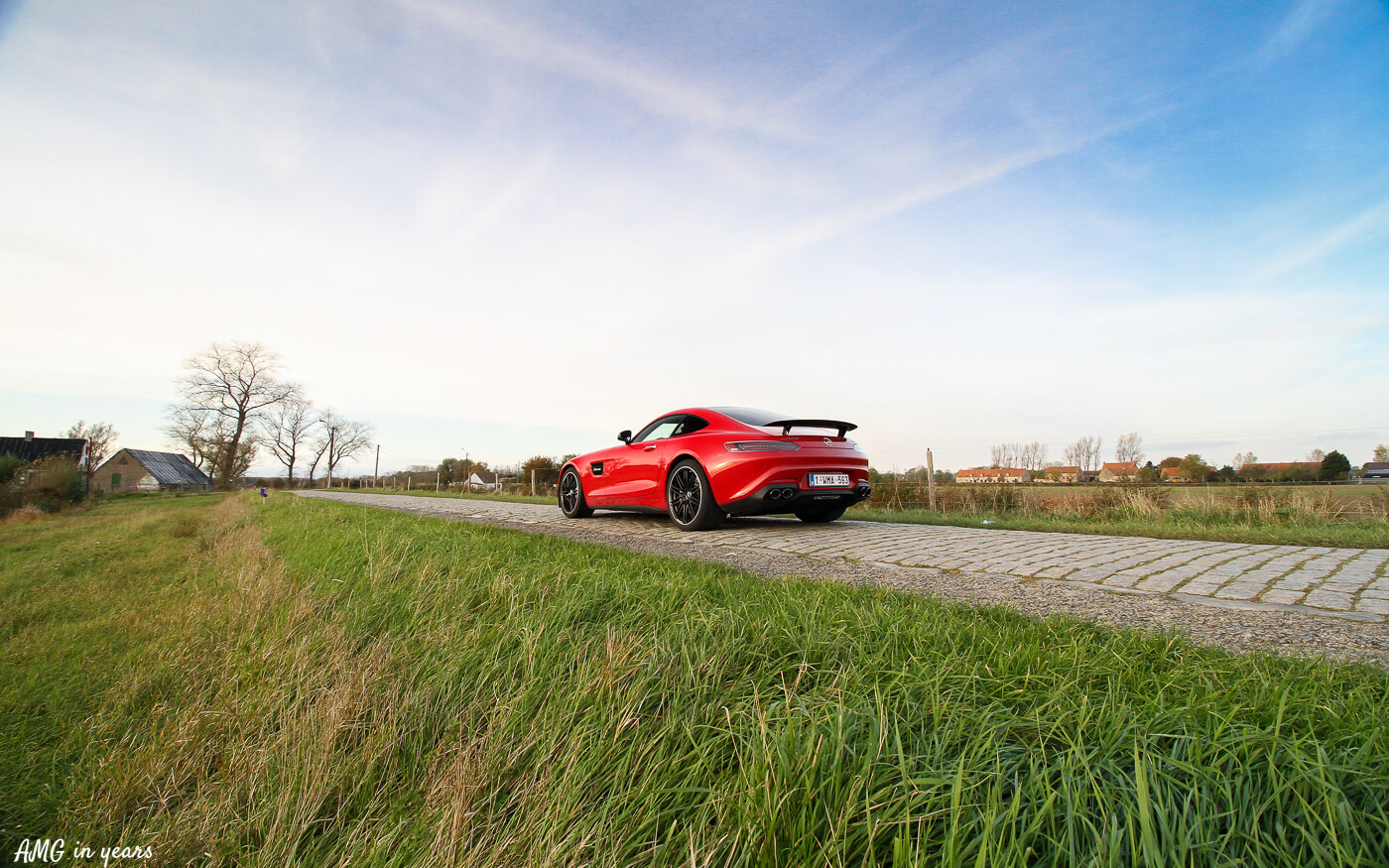 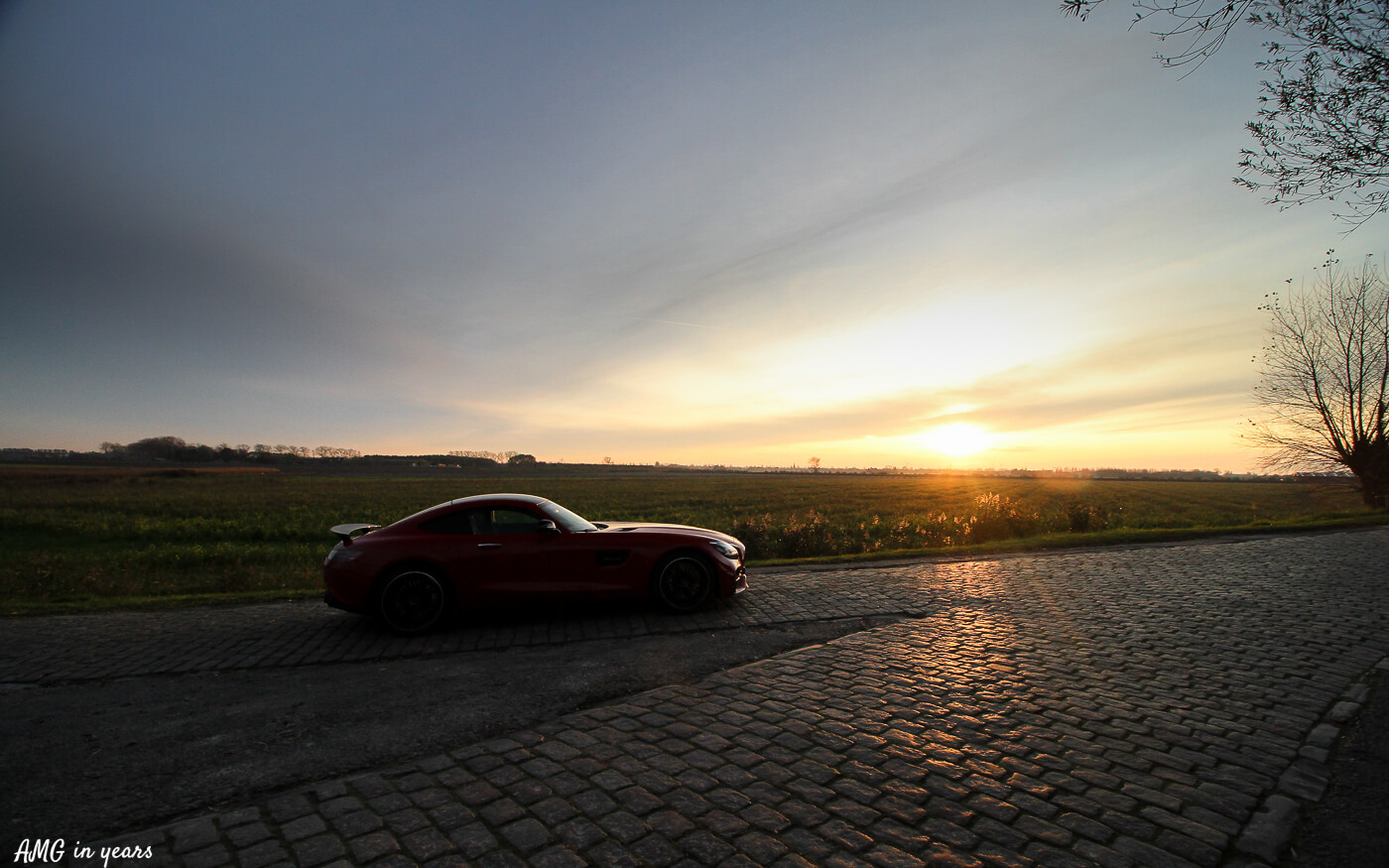 Special thanks to Mercedes-Benz Belgium for the testdrive and to Ronny Kustermans for the duoshoot with his AMG GT R.