Trending
You are at:Home»Test Drive»Test drive: Mercedes-AMG A 35 – Is this red pig a real AMG?

There she stood, the smallest of the AMGs. An AMG positioned on the lowest step of the AMG ladder, and entry AMG of the compact segment: the A 35 AMG. 306 horses in the front, promising for a car that only puts 1.4 tons on the scales. AMG In Years could test this jupiter red colored A 35. It couldn’t be more iconic. Spa Classic was planned that weekend. As we went to Spa-Francorchamps with a red AMG. Iconic so, because it all started there for the men of AMG, in 1971, with the famous so-called “Rote Sau”. A 300 SEL that had been drilled to 6,8 l. Okay, the block in “our” A 35 is not 6,8 l, but 2,0 l. Unfortunately, the gasoline prices of those days no longer apply, meaning our wallet will be happier that we just drive a 2 litre this weekend. Nevertheless, back to the A 35. The key with AMG inscription is already a nice detail, noticing while crawling behind the wheel. Press the engine switch on and the AMG letters appear on the 10″ large and clear media display as well as a pair of mean looking headlights on the screen in front of the driver. In contrast with the upcoming A 45 and A 45 S, this M260 engine is not built according to the ‘one man one engine’ philosophy. For your technical information, a twinscroll turbo on the exhaust gases is used for turbocharging. Furthermore each cylinder group is linked to a seperate intake of the twinscroll turbo. 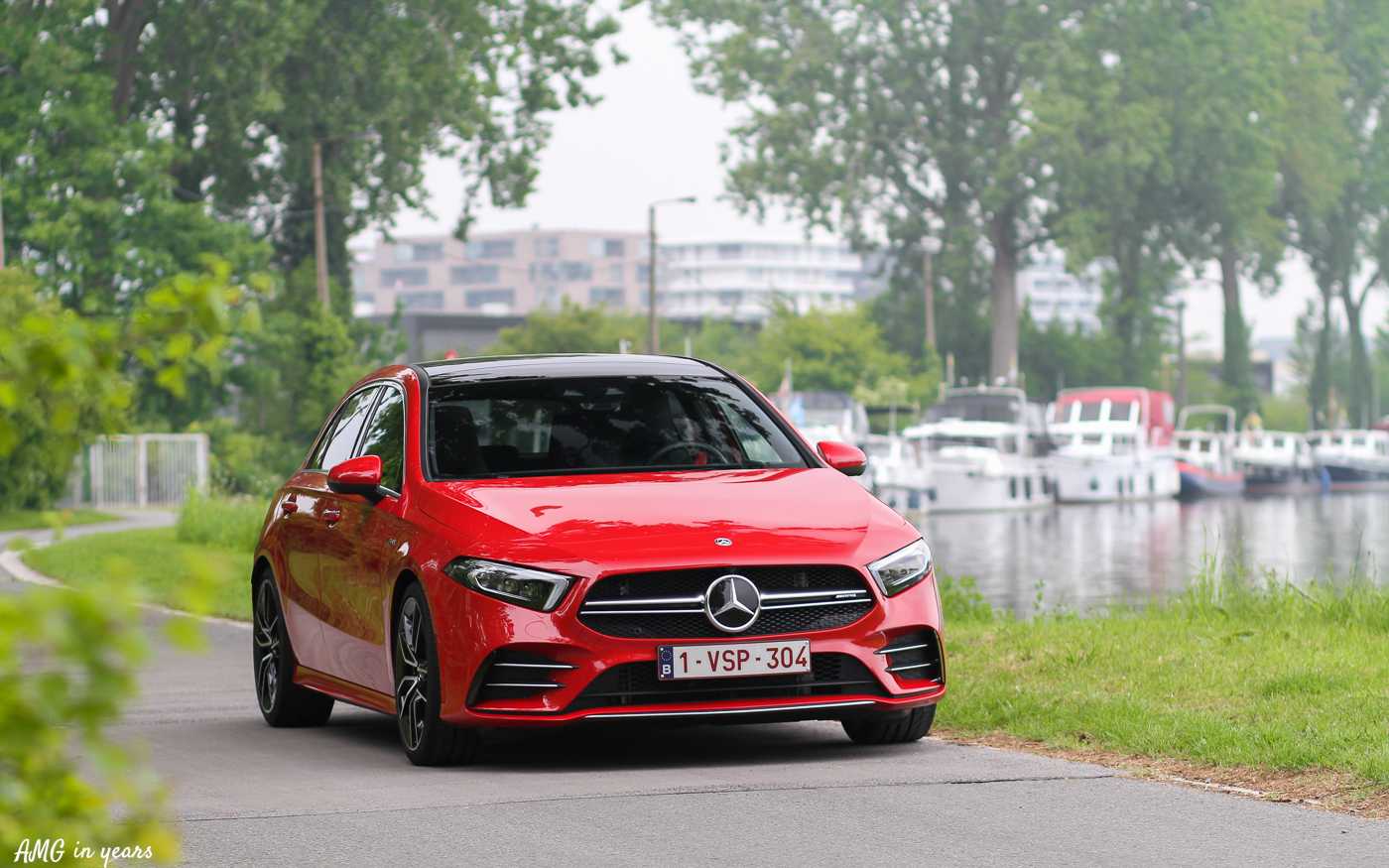 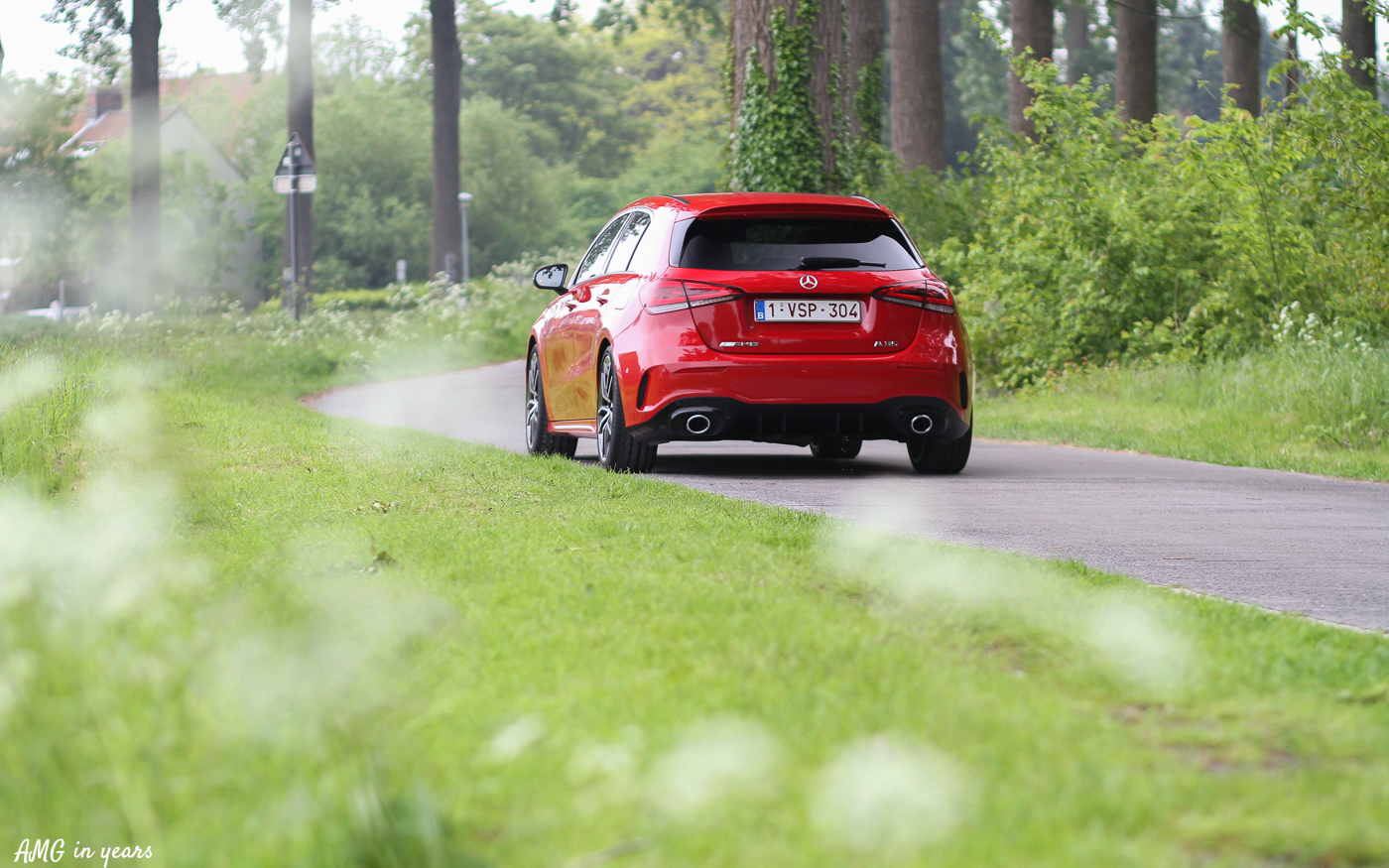 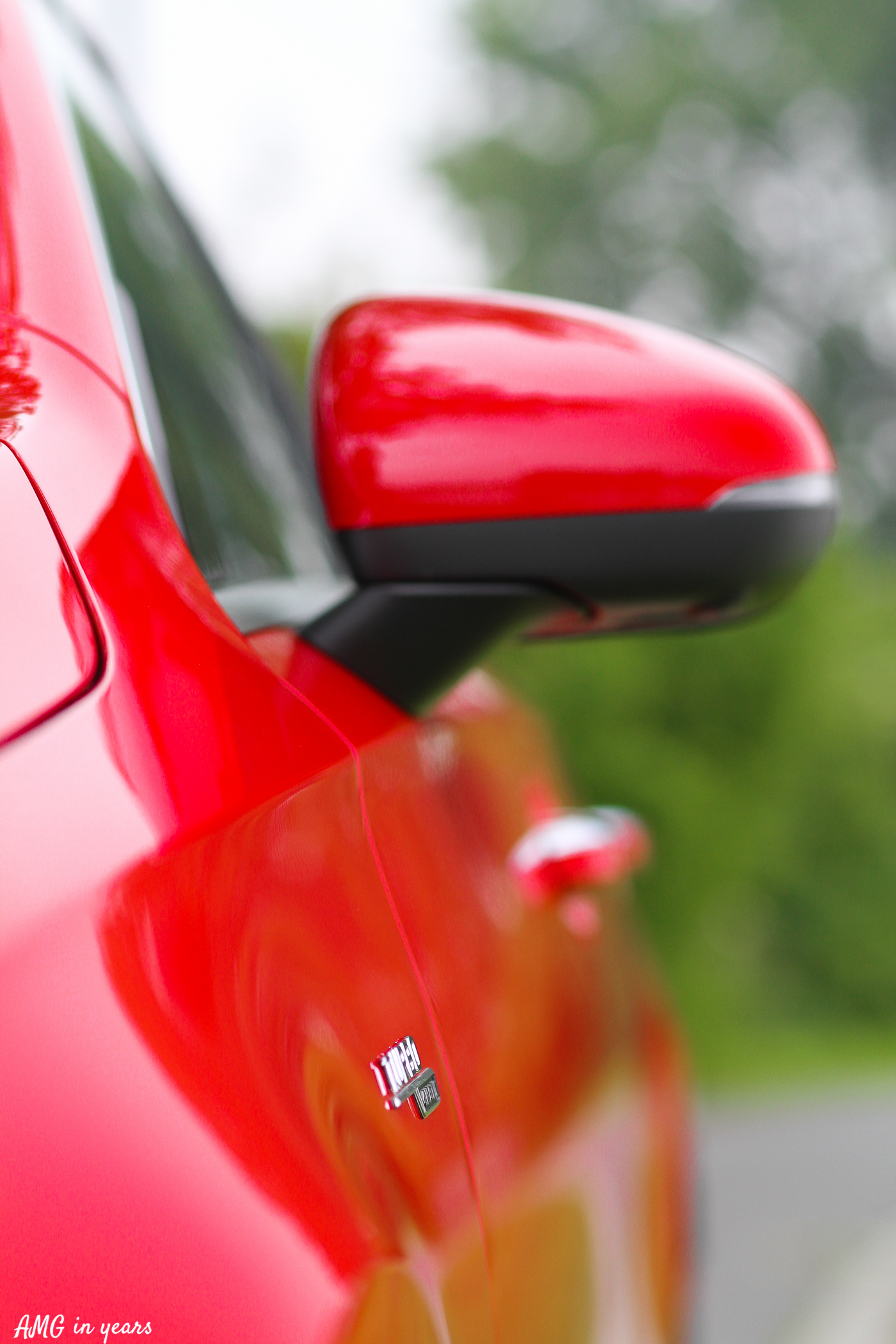 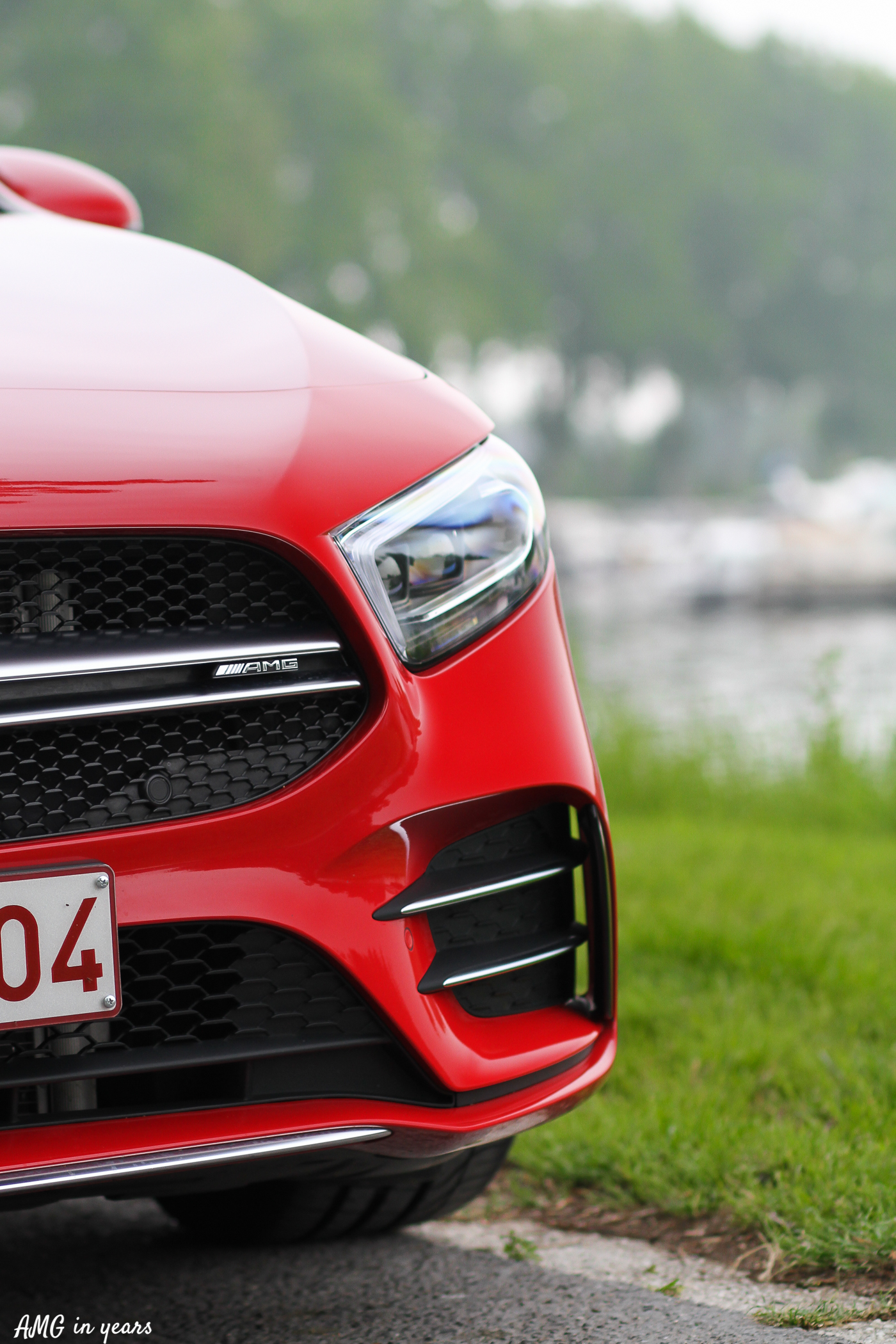 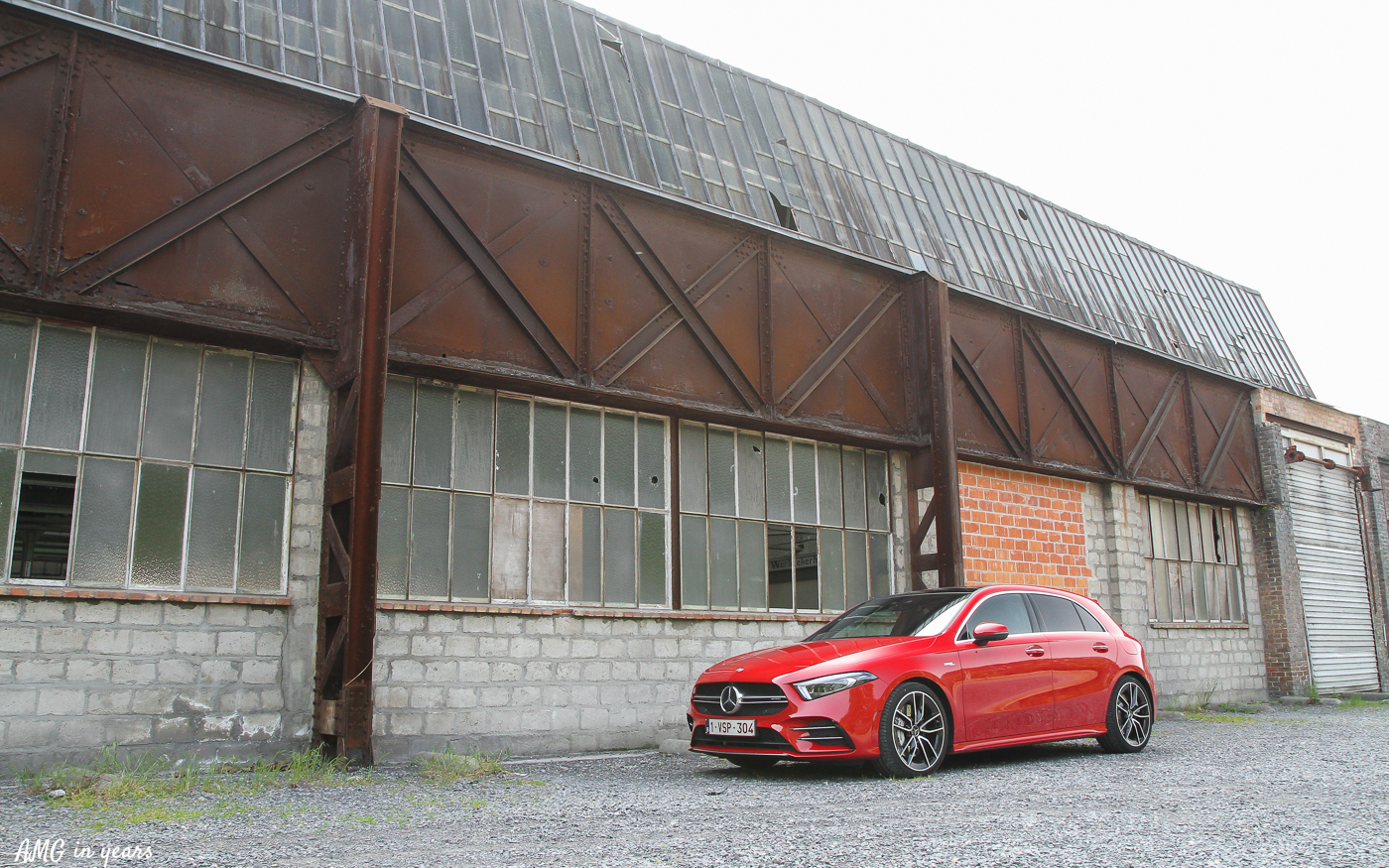 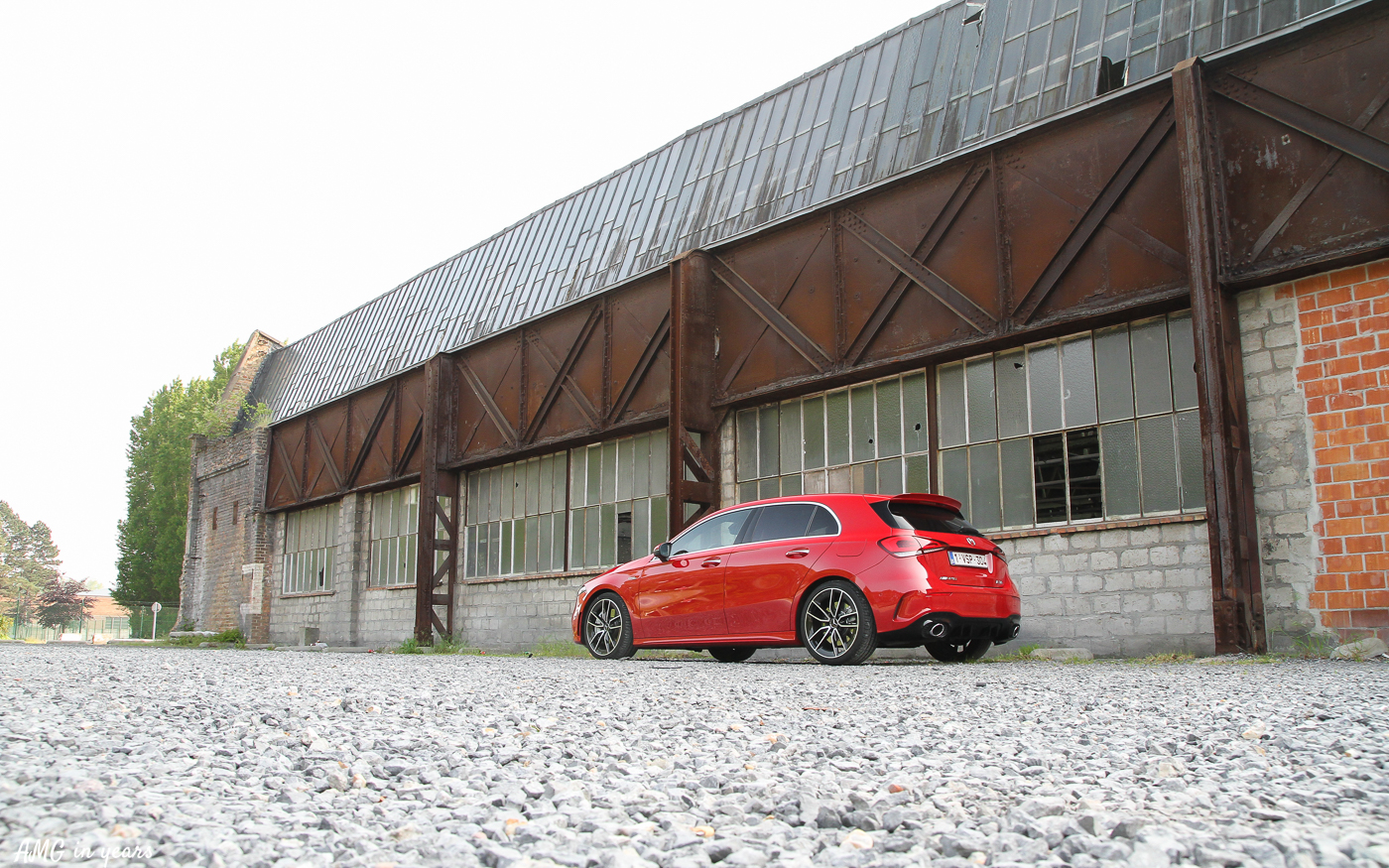 Apart from the AMG key and the AMG letters that are projected on the screen at the start, there was no other visual distinction that you actually took place in an AMG. A bit of a shame. In other words, the interior was identical to that of an A-class with optional AMG-line. If you leave an amount of 52.000 euro (incl. 21% VAT) on the Mercedes account for an A-class with a genuine AMG badge, you still expect more diversification compared to a normal A-class in some respect. Let’s wait and see what the A 45 brings. Obviously you can adjust and individualize the interior, but that’s when the bill starts to tick. 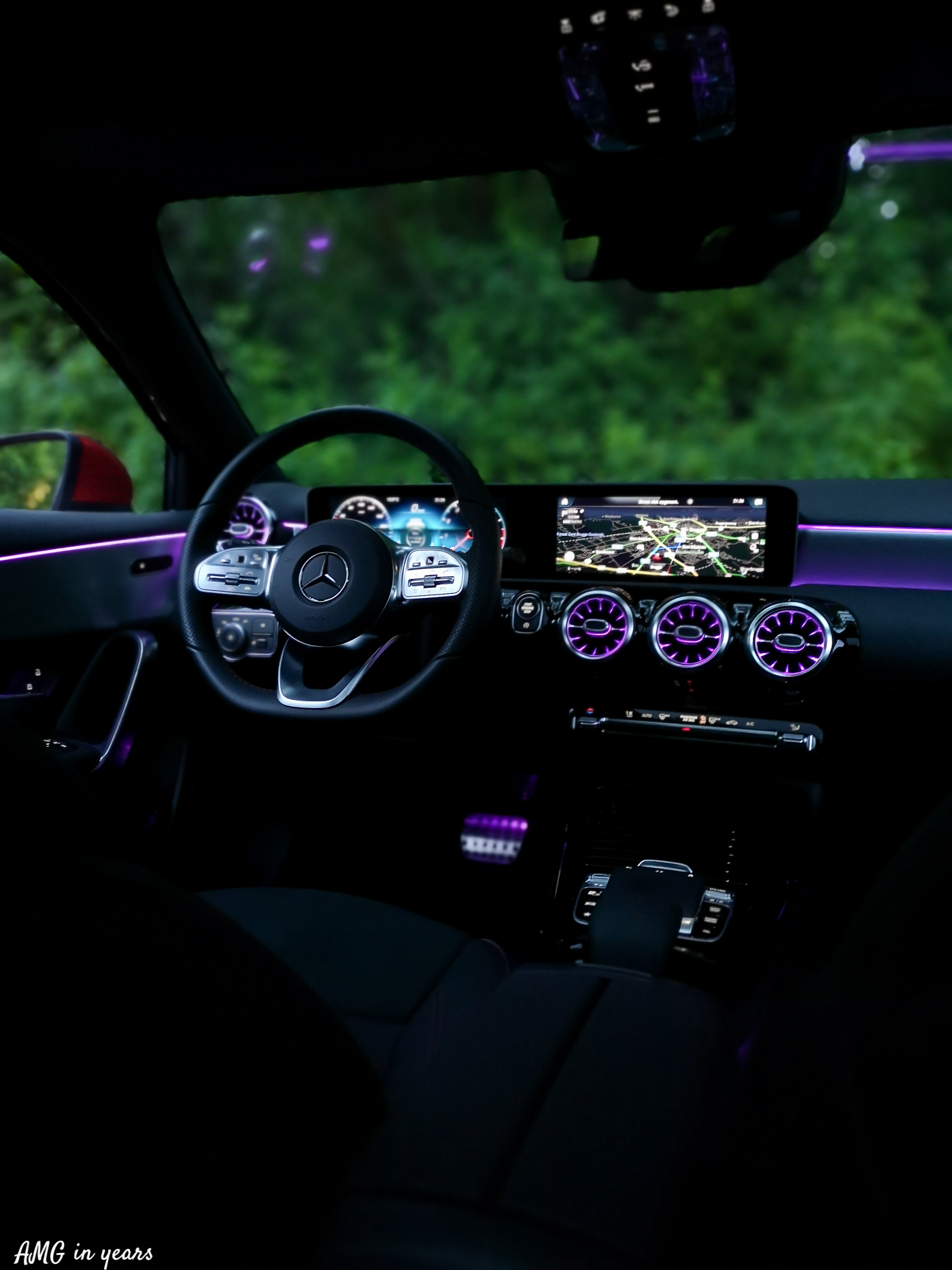 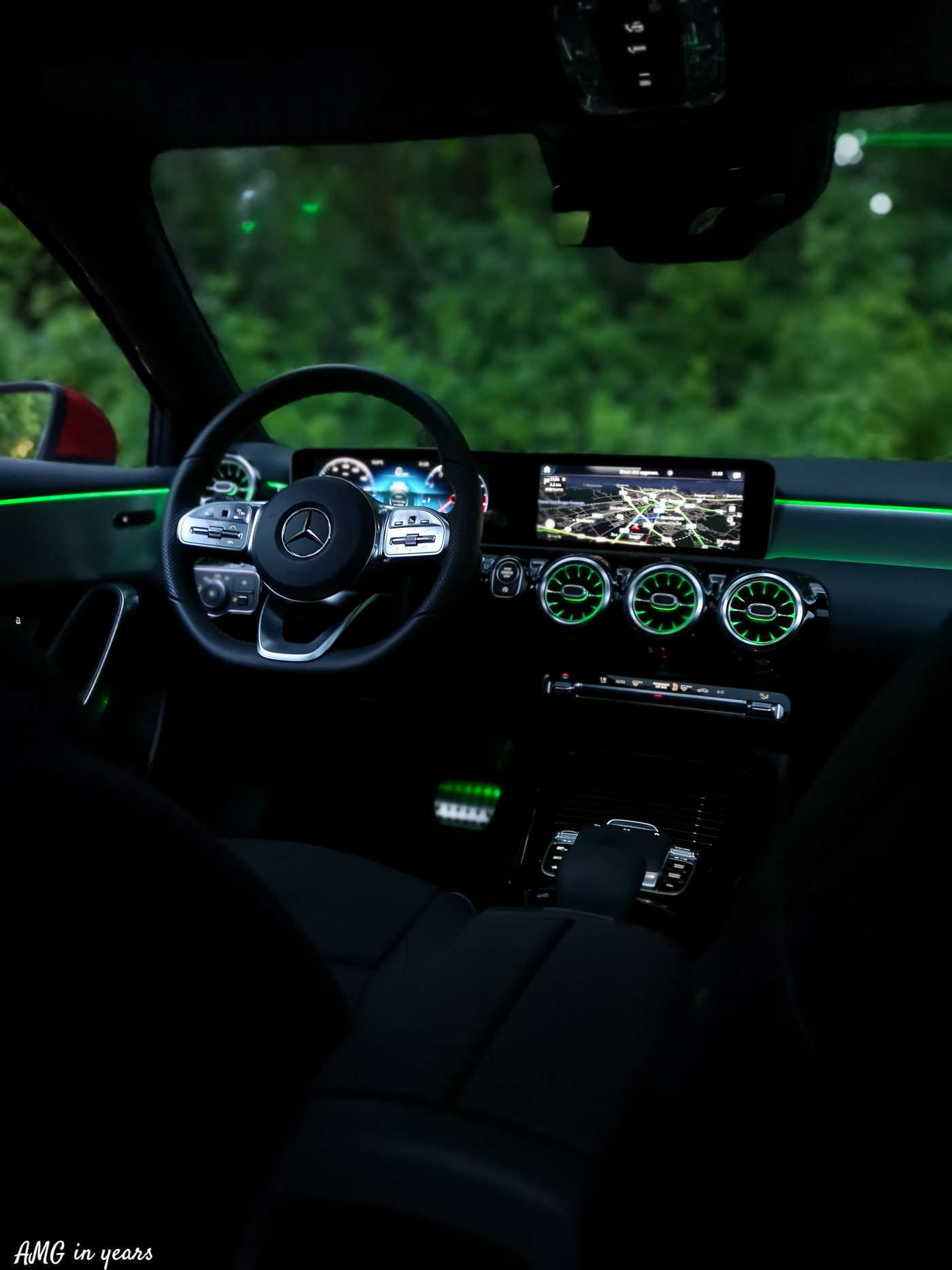 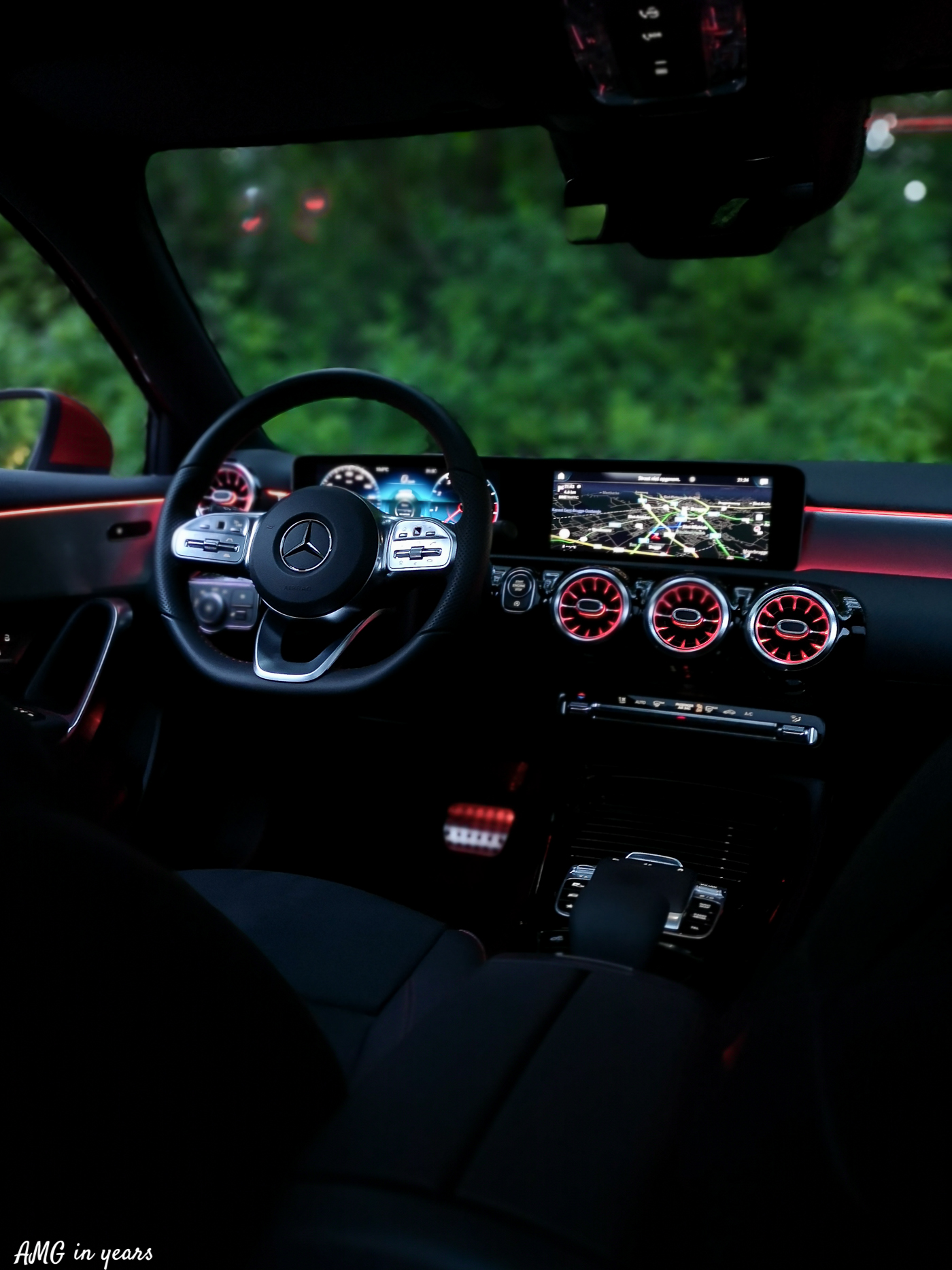 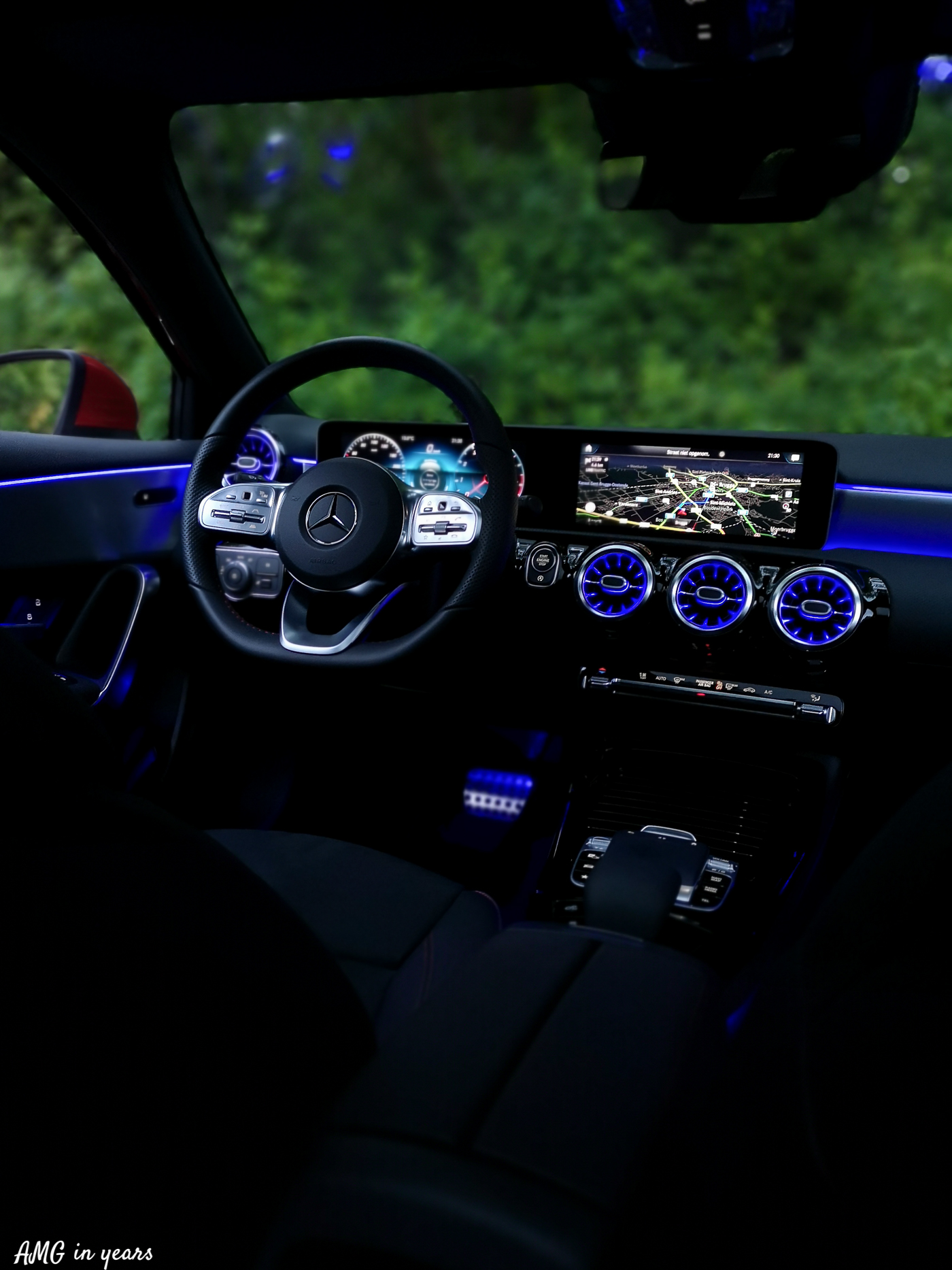 The new MBUX user interface works precisely and the lady behind “Hey Mercedes” is always ready to serve you. Even if you don’t want or if she has the slightest suspicion that you need something. The A 35 does have AMG-specific tabs in the onboard computer as well as in the menu of the media display. This allows you to call up AMG-specific information that goes from the temperature of the oil and coolant to the boost that is generated by playing with the gas pedal and the rpm. Elements that can help you monitor the car well on the circuit, if that’s within your natural habitat. 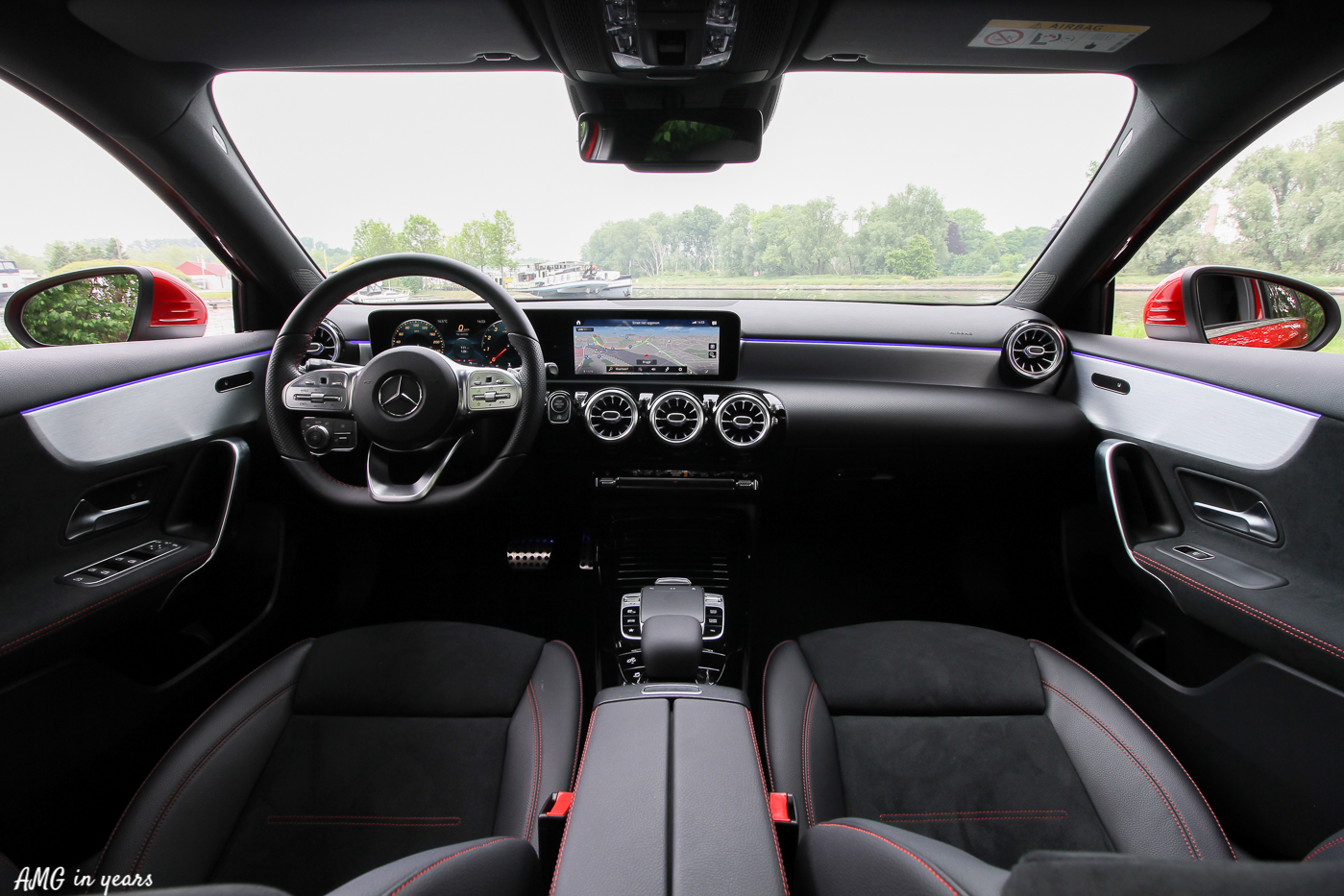 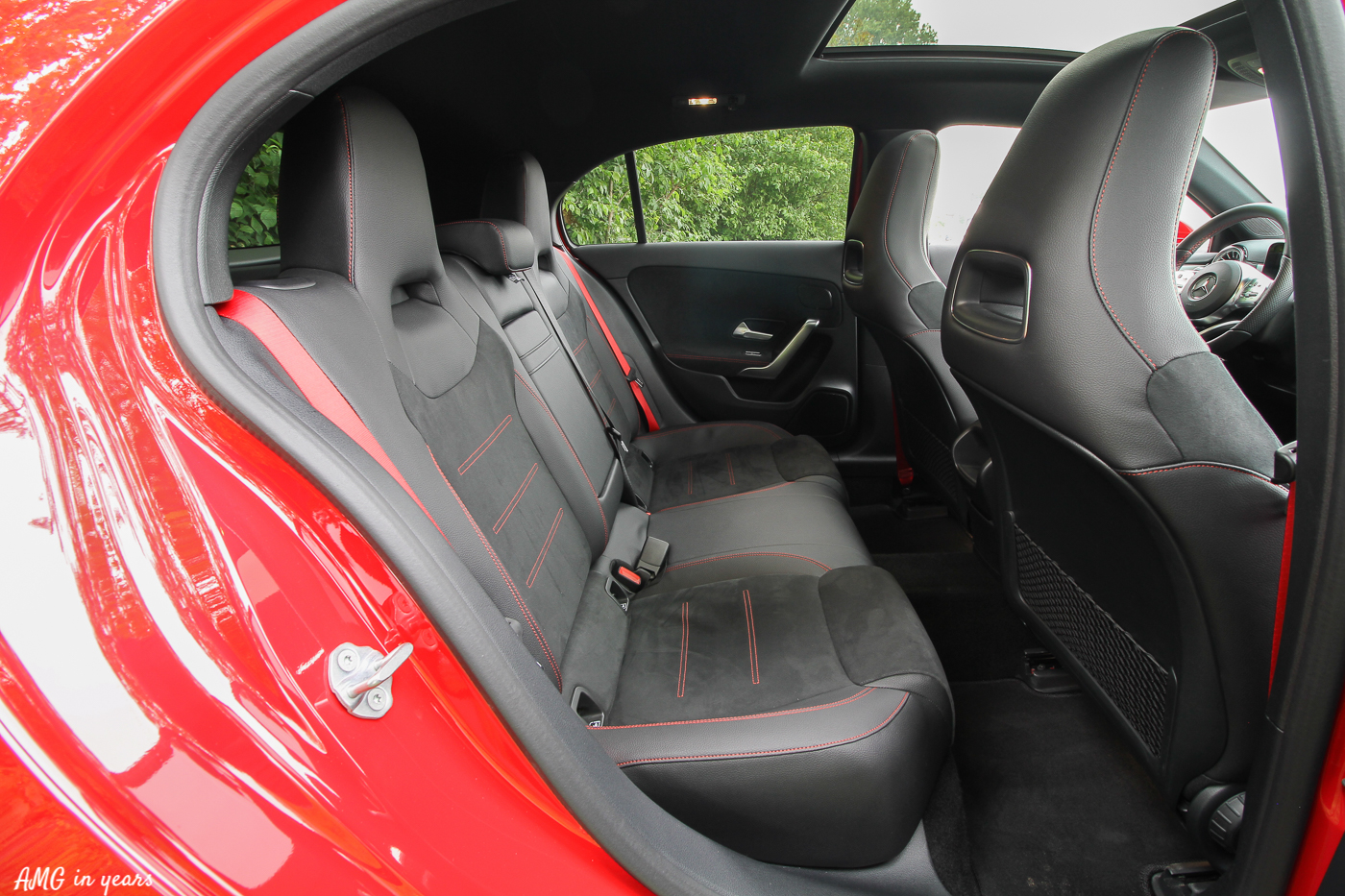 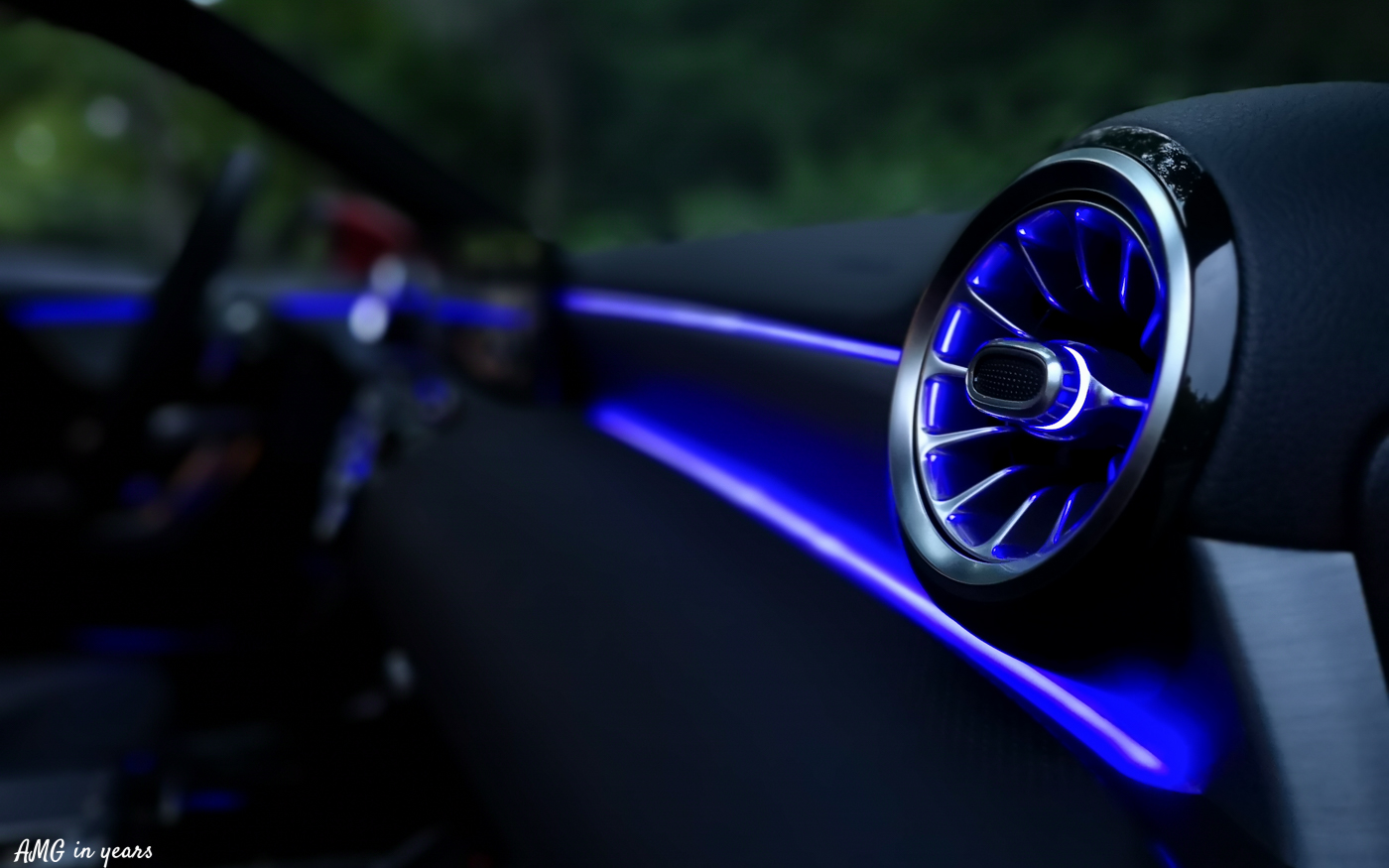 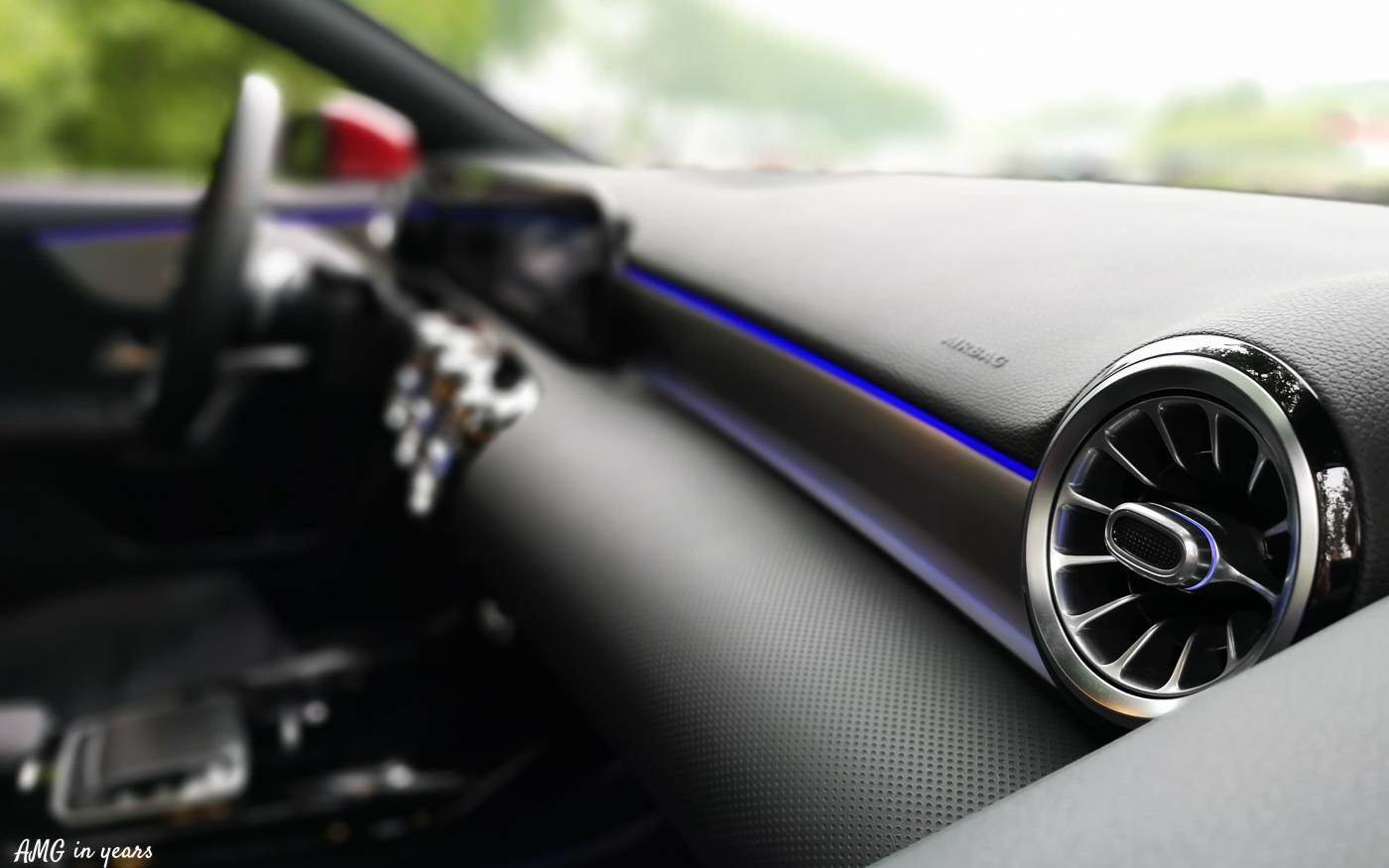 The A 35 simply looks good, even in standard trim. Our test car did not have the AMG aerodynamics pack (which ultimately results in a large spoiler at the top of the boot lid and some added flicks on the front and rear bumpers for better airflow and thus creating better downforce) but that’s not a deal breaker. The standard AMG sauce starts at the top of the boot lid with a “lip” that faces upwards and looks pretty cool. Even this smaller spoiler creates extra downforce at higher speeds. Hence it goes to the wider rear bumper with two round exhaust trim pieces and in between a fat diffuser that gives the A 35 a wider and cooler appearance. The AMG treatment continues in this way to the other side towards the so-called “sharknose” with pointed headlights and so-called “Gillette” (double-spoke) grill. Fortunately the exterior distinguishes from a regular A-Class as you effectively get distinguishing features compared to the AMG-line A classes. Except for the 5-spoke AMG rim as it’s the same as the AMG line. If you want to distinguish it from a normal AMG line, go for the 19 inch RTI rim. The coolest rim for under the A 35, and the rim that was also under our test car. Beautiful rim! 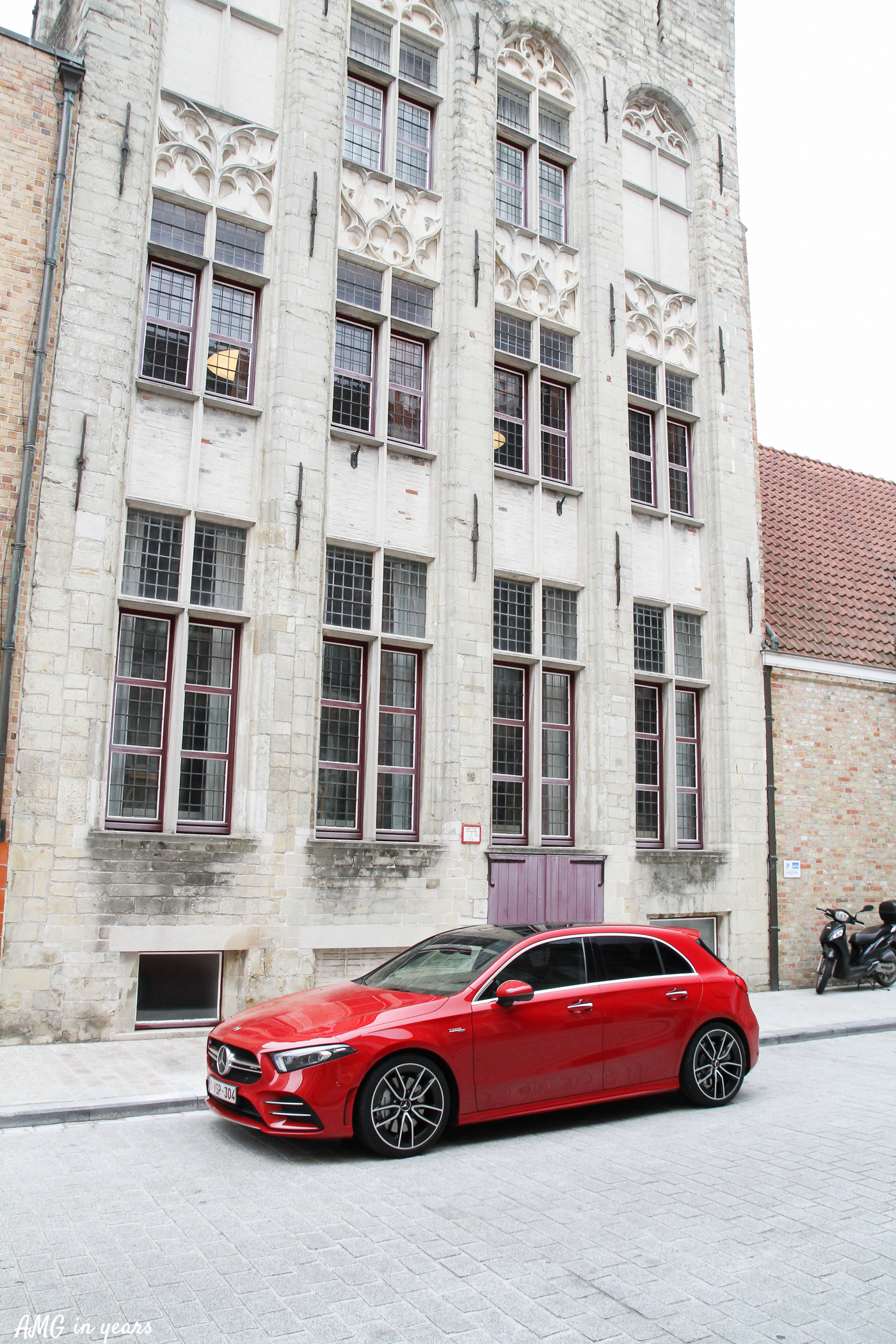 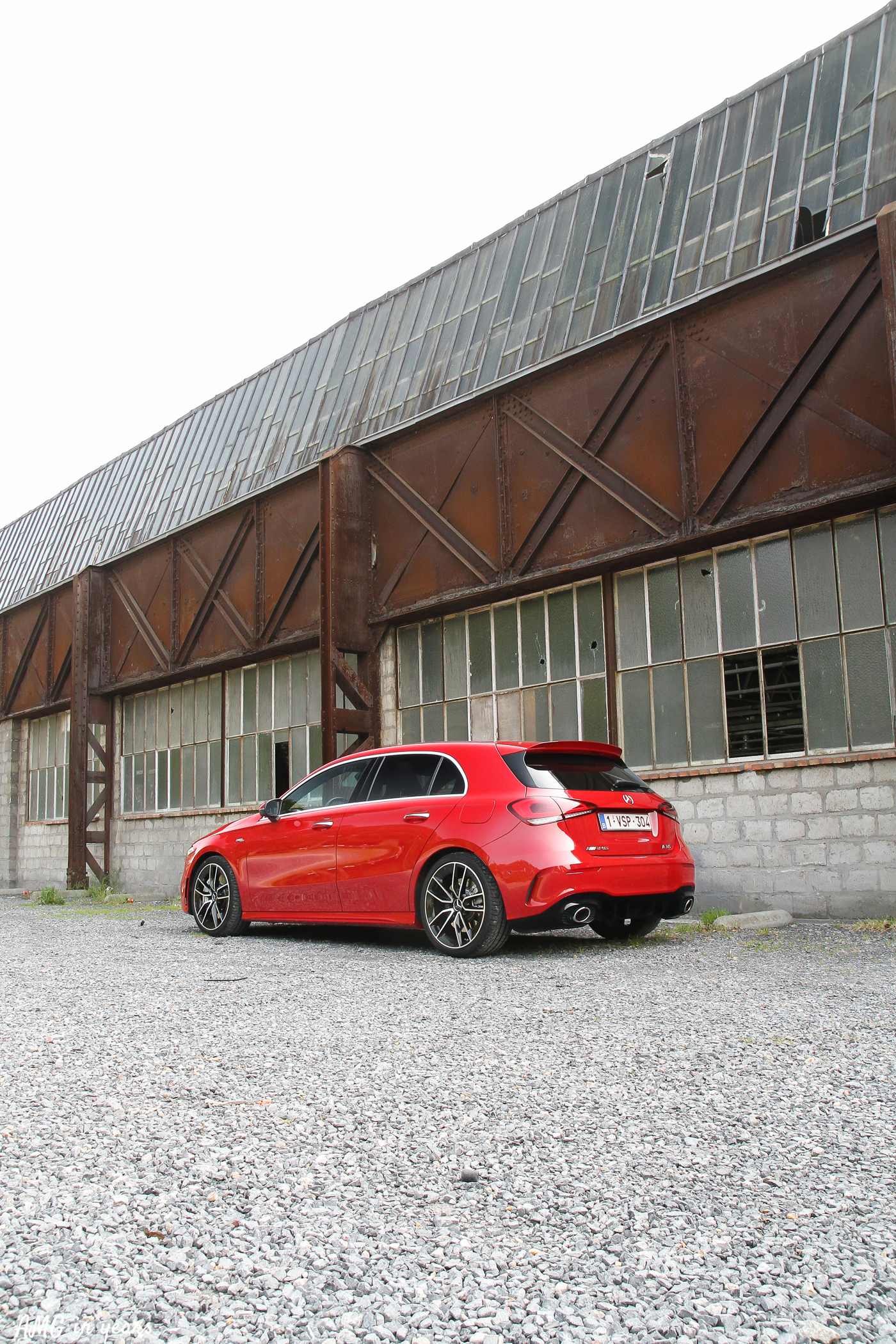 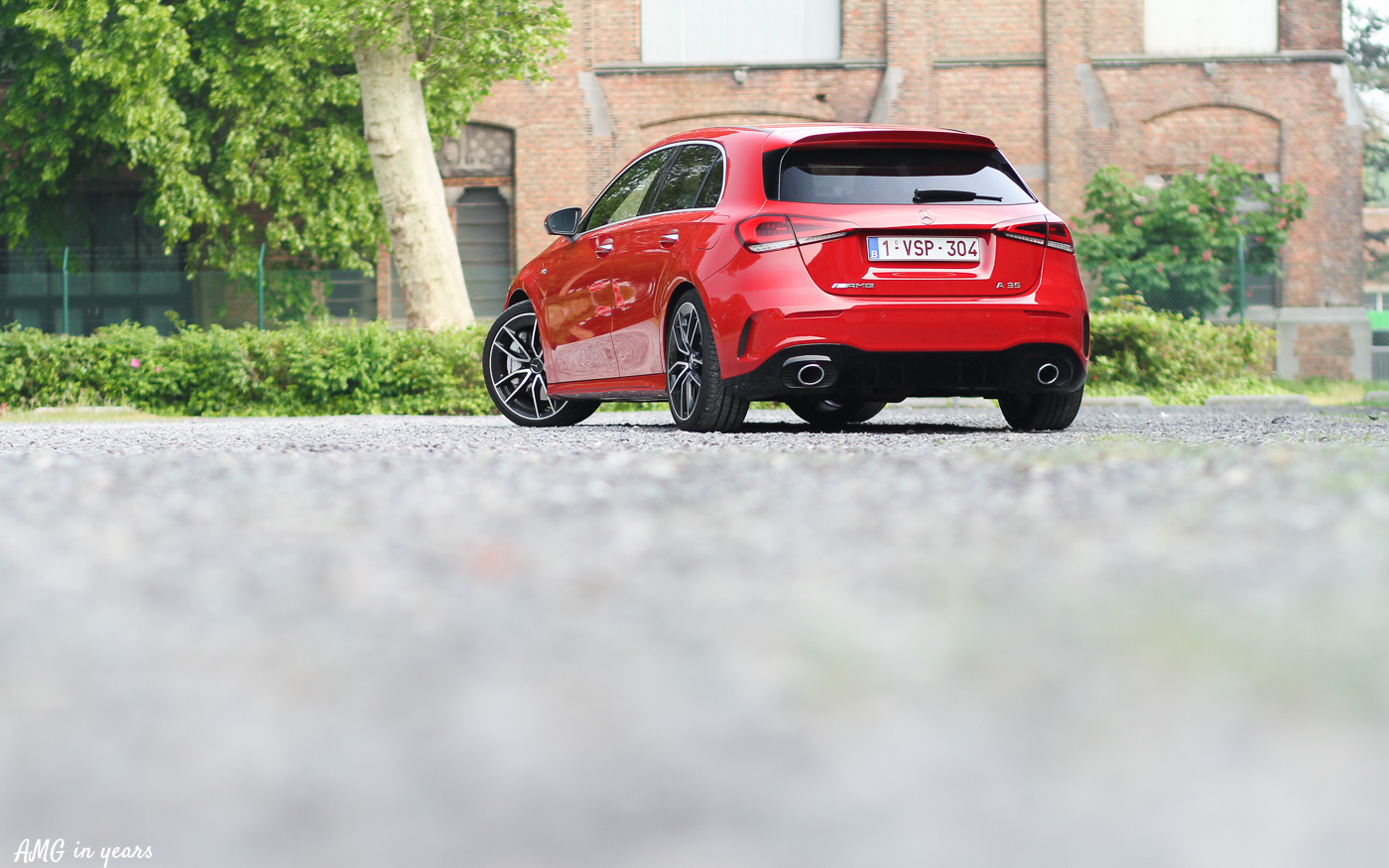 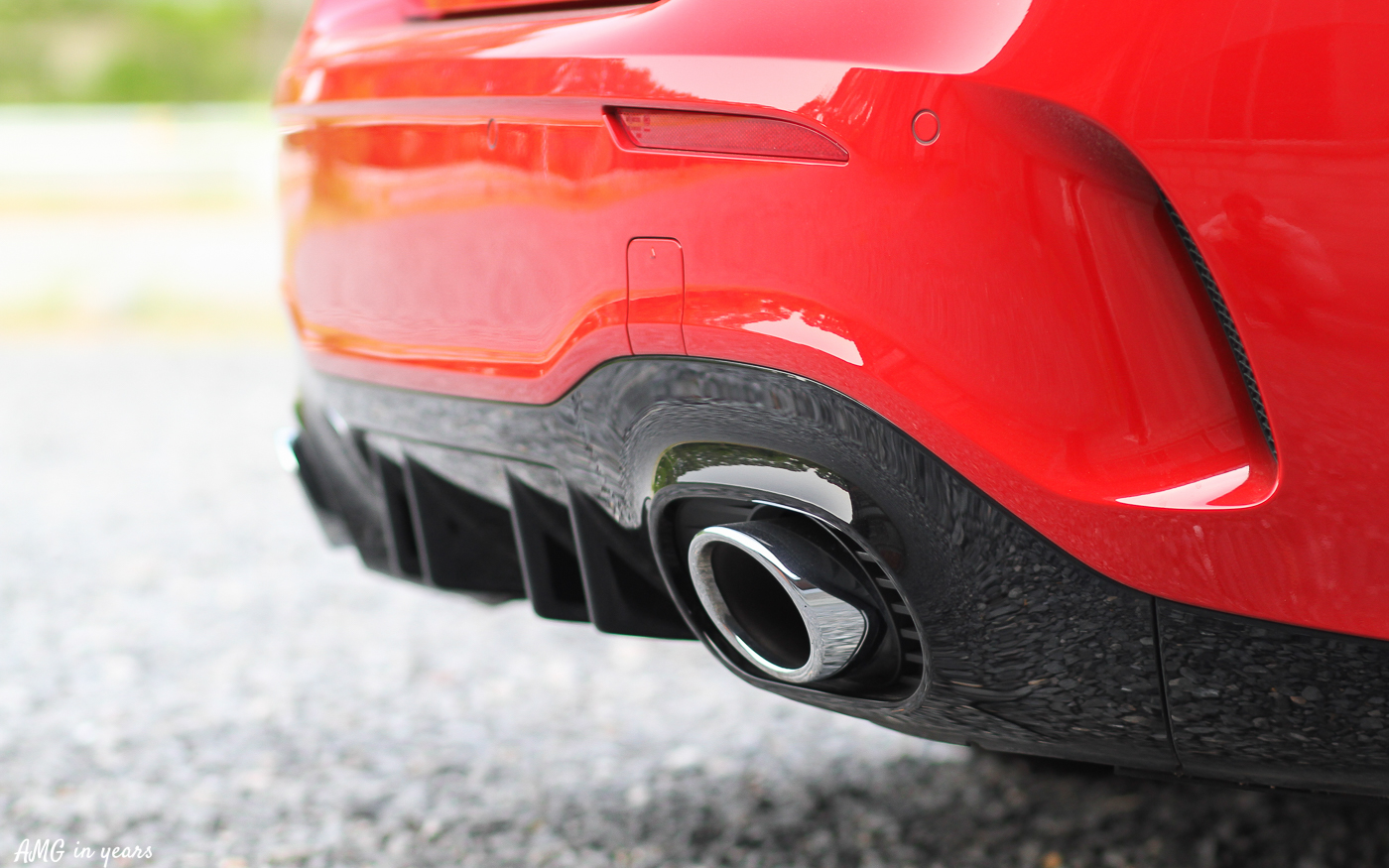 Driving the A 35 AMG is a true pleasure. You always start in comfort mode by default, in which the car presents itself perfectly for daily use. If you want it a bit more intense, you can switch to Sport. This results in a more responsive gas pedal in combination with a tighter chassis. If you want it even more intense, you can switch to Sport+. A bit of the same as Sport, but in Sport+ you can imagine yourself among a lot of popcorn machines in a cinema. The pops and bangs come to your ears. It’s addictive! Switching gears with the 7G-DCT (Double Clutch Transmission) is extremely fast, however the gearbox changes are a bit jerky a lower speeds. Are you running out of power? Throw the right foot to the ground for a moment and the machine responds at lightning speed (even in comfort mode). The gearbox switches back in a few milliseconds and you can go up to a torque of 400 Nm. The A 35 is sensible (or perhaps under pressure from your new, digital friend who is hiding behind “Hey Mercedes”) and doesn’t let you go further than 250 km/h. The sprint from 0 to 100 km/h is possible in only 4,7 seconds. New is the Slippery mode for difficult driving conditions such as limited grip (rainfall or sleet). Thanks to the 4MATIC all-wheel drive system the grip levels are impressive. An electro-mechanically controlled multidisc clutch is integrated in the rear axle transmission and can distribute the torque from front wheel drive to a 50:50 distribution. AMG also did some efforts to increase the stiffness of the car. So there is a bolted lightweight aluminium plate under the engine and some additional diagonal braces to increase torsional stiffness. 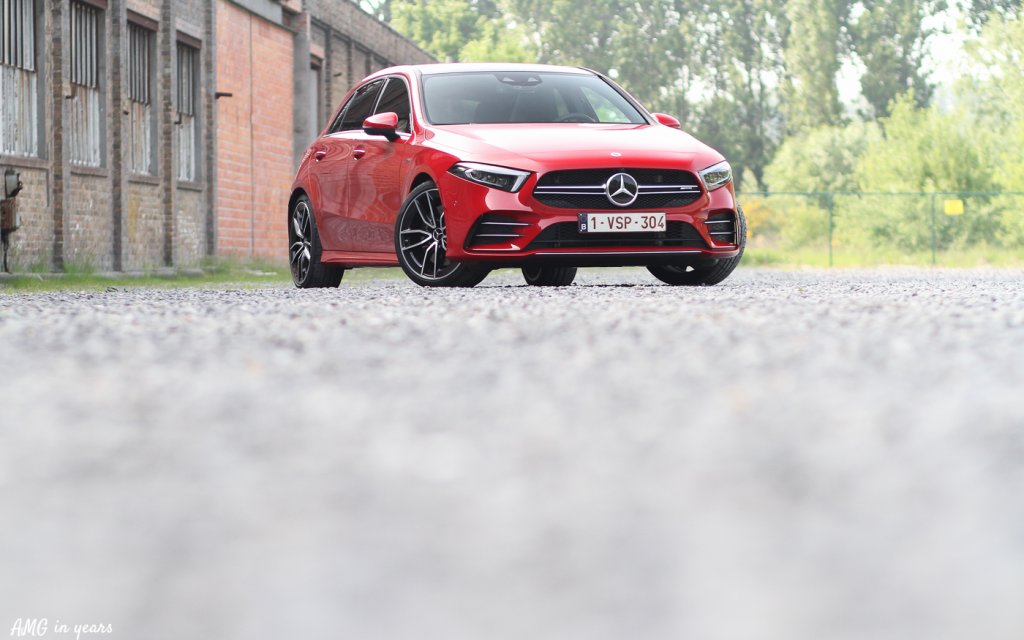 It sounds predictable, but it was a true pleasure driving this small “Rote Sau”. The car perfectly lends itself for daily use, with an average consumption of 6,3 l /100 km (8,2 litre in reality). The compact design allows you to fit into the ever-smaller streets and the digital interior means you can step into the future. You can actually compare the A 35 as the son-in-law you would like to have. A smart, manageable young man who is polite and who will do whatever you ask for, tightly dressed in beautiful designer clothes. He makes you happy that your daughter has committed herself to someone of that kind. But once it becomes later in the evening and your parents go to sleep, the same young man can go party with your daughter until the late hours and even brake out the big guns. That’s the way you can see the A 35. Manageable and with a certain finesse, but the other extreme of his character is going wild and having fun.

In the past, the AMG philosophy consisted of pure brutal, raw and uncontrollable power. That’s different now. With the current generation of AMG engines you still have that raw power, but it has become controllable. The A 35 is a good example of this. It’s like a wild (red) pig that one could eventually make tame. The base price of around 52.000 euro (including 21% VAT in Belgium) is the game breaker. Not really an entry level of driving performance … 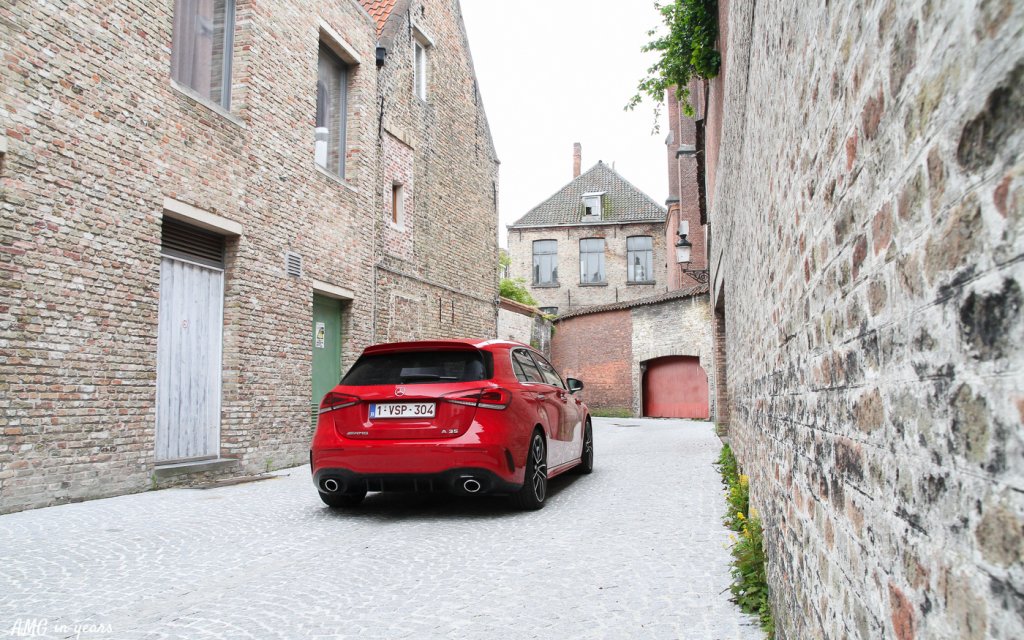 Special thanks to Alexandre for writing main part of this article. Go and follow him on Instagram.